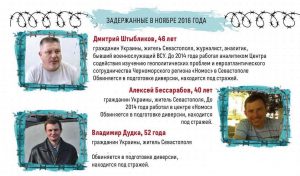 Let’s recall that on 9 November in Sevastopol, the Russian Federal Security Service detained Ukrainian citizens, residents of Crimea Dmitry Shtyblikov, Alexei Bessarabov, and Vladimir Dudka in relation to the “Ukrainian saboteurs” case. On November 10 the Russian Federal Security Service spreader the video of denention and search in the apartment of Dmitry Shtyblikov in the media and also distributed the videos of staged interrogation.