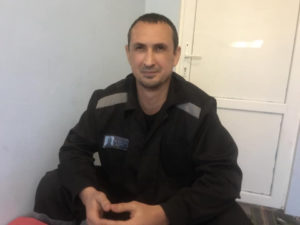 Crimean activist Yevgeniy Karakashev has not seen relatives and friends for almost two years. He was sentenced to 6 years in custody for, as it was said, his publishing a video and chatting in the social network and has been serving an illegal sentence in the Kabardino-Balkarian Republic of the Russian Federation.

Mr Yevgeniy Karakashev was born in the Kherson Region, in the village of Velikaya Aleksandrovka. When he was 3 years old, he moved with his parents to Crimea, to Yevpatoria. After serving in the army, in the difficult 90s, he agreed on any job to support the family. Later he entered the medical college, and after graduation, – the Vernadsky University, rehabilitation. He worked at a Yevpatoria health treatment center, rehabilitating the cerebral palsy kids. 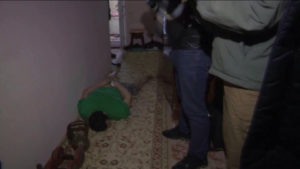 On February 1, 2018, Russian security men came to the Yevpatorian’s house with a search. Journalist Aliona Savchuk wrote then on Facebook that Karakashev was “taken tough: the men in plainclothes ran into the house, and not introducing themselves, made him lay on the floor at once, twisted his arms, and handcuffed back. He says he has stayed handcuffed to the THF[1]. He has an enormous abrasion on the right side of the forehead. Only in the evening Karakashev was able to call a friend and asked to find a lawyer.” “Investigator Abushayev testified that he did not remember how long Karakashev had stayed handcuffed – 5 minutes or 3 hours,” the journalist wrote.

Karakashev was accused of extremism (after partial decriminalization of Article 282 of the Criminal Code of the Russian Federation, this case was stopped) and public calls for terrorist actions due to messages in the social network published in 2014 – 2015. The Crimean has been in custody since February 2018.

According to investigators, Karakashev published a video from one of his VKontakte pages at the end of 2014, that is said to call for terrorism. In addition, as stated in the judgements, in January 2017, from another account, he posted a text that contained signs of “propaganda of the ideology of violence” and “calls for terrorist activities” in a chat room for 35 people.

According to his mother, from early childhood, Yegheniy has been fond of geography, was a travel club member, went hiking in the mountains. He loves animals very much, and has brought home and nursed those who needed help. 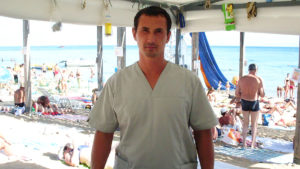 “Zhenia has been always concerned about the surrounding nature, he collected signatures against the development of the Lake Moynak coastal territory. He met with Sevastopol activists, and then together they were actively opposing the construction of a tourist complex in the village of Zaozernoye, that would block residents’ access to the sea and harm the estuary,” the activist’s mother said.

“The search in our house began early in the morning, before 7 o’clock. At least 20 people came, brought witnesses with them, and didn’t attract anyone from the locals. They walked around the yard and garden with a metal detector, but found only rusty nails. They brought a dog, searched for drugs throughout the house. But there has been never any weapon in our house, Zhenia has never manufactured explosives, there have been no components for this. This would not have occurred to him. The search lasted until 2:00 pm, the investigator also took me to the Investigative Committee. I had been there by 8 o’clock in the evening until Zhenia was brought there. Where he has been all this time, I don’t know, ” the activist’s mother says.

According to her words, only the first court session was open for the public, all others were held in camera. 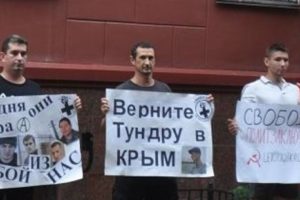 “Of course, we came, but we were not allowed into the building. While I came for every meeting, first in Yevpatoria, then in Simferopol. In August 2018, before my son’s birthday, the investigator allowed me to see him – once for more than two years. Now, when he is in the colony, only 1 parcel is to be sent every six months, Yevgeniy has already received our first one. He sends us letters, writes very often, every other day. He feels okay, pressure has stabilized, joints are not so sore, meals are better than in the Simferopol Detention Center. He is completely isolated, there are no newspapers and a TV, books are not allowed either, he knows only what I am describing to him in the letters,” said the mother of the Yevpatorian.

Lawyer Aleksey Ladin is sure that the case of Yevgeniy Karakashev has been falsified and is politically reasoned.

According to the lawyer, one of the initiators of the criminal case against Karakashev was Andrey Filonov – that time’s mayor of Yevpatoria.

The day when Karakashev was detained, public hearings were held at the city hall of Yevpatoria due to the change of purpose of the land for construction. Karakashev, as his lawyer states, was one of the public activists, protesting against this. Before the occupation, he had also opposed the development of Yevpatoria, and raised environmental issues.

“I assume that this became the reason for his detention. The mayor of Yevpatoria Filonov himself (who is also currently in custody) publicly explained on the day of the public hearings that a whole group of people who were trying to destabilize the situation and undermine the elections, etc., had been detained. Obviously, he implied Karakashev though there had not been any official information about the detention yet.

I believe that this was inside information the mayor had, and he was, most likely, one of this criminal case initiators. As far as I know, he was later held accountable for the illegal change of land purpose. The background of this case was reported to me by Karakashev himself, I first saw him after the arrest. Then there were the mayor’s statements, the mud-slinging of pro-Kremlin bloggers in the Telegram channel, who “leaked” information with photos of the search at the Karakashev’s. These photographs could only be taken by policemen, so they were obviously contacted directly, ” Aleksey Ladin told the Crimean Human Rights Group.

According to the investigation version, Karakashev posted the video forbidden in the RF on his wall in the VKontakte social network, with open access.

Ladin said that Karakashev himself did not remember whether he had attached that video or not.

“If he attached this video on his page, most likely he was sent this video by his so-called ‘friend’ Vasilchenko. The video contained instructions for making explosives. In the crawline under the video (a few seconds) there was a recommendation to throw explosives at the authorities. Therefore, the wording was stated as propaganda of terrorism. This is a classic entrapment. It was Vasilchenko who was crack-headed with weapons and violence. Based on the criminal case files, when Vasilchenko’s computer was examined, many files related to weapons and the explosive manufacturing were found there. Vasilchenko explained all this pointing to Karakashev who was said to have sent this stuff to him. But no such file was found at Karakashev’s computer. I may soundly assume that Vasilchenko has posted these video in the social networks, too. More than likely he made an agreement with the FSB men, and all that was cleaned off in return for his testimony against Karakashev, since it was Karakashev who was ‘ordered’, Aleksey Ladin says.

There is a report of inspecting the Karakashev’s page in the social network in the case files. According to the lawyer, it clearly states and demonstrates that the video was hit just once. Though an FSB man had reported several days before the hit, that, according to intelligence information, Karakashev had a criminal video on his page.

“It is reasonable to assume that it was either the FSB man or his agent. Alternatively, Vasilchenko, who himself forwarded this video, and then watched it again. Thus, there was no “public danger”, no one else watched this video. It became known only after its dissemination had been attributed to Karakashev.

If the goal of law enforcement agencies had been to stop the dissemination of such videos, then they would have tried to block the page of Karakashev or delete it through the social network administration. But in fact, they didn’t care whether it would continue to disseminate or not. They had a specific goal – Karakashev himself, and they achieved it. The further fate of this video was of no interest to them, and it went on hanging on the page,” the lawyer explains.

During the interrogation, Karakashev also stated that before the arrest he had noticed signs of hacking on his pages in the social networks.

“My mailbox was hacked, the bound phone number was changed in it and I failed to resume an access to it. Not my entries appeared on the pages, I deleted them, some of my entries disappeared. Some users received messages with swearing and calls for violence from me, I changed passwords several times,” the activist said.

Lawyer Ladin describes Yevgeniy Karakashev as a calm and cool-headed person with a strong sense of justice. 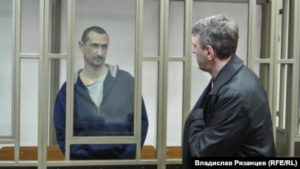 “Eugene was a physiotherapist in the Ministry of Defense health center. He is highly competent in his field, recovering the people after the strokes. One of his patients gave not a very good testimony about Yevgeniy during the case investigation, but he rejected this in court, because this was the investigator’s wording One of the investigators in a private conversation admitted that he did not like such political case, when everyone understood the underpinning. This opinion may be heard in the informal conversations with other investigators, too, but, nevertheless, they continue to work,” the lawyer explained.

On April 19, 2019, the North Caucasian Area Military Court in Rostov-on-Don found Yevgeniy Karakashev guilty and sentenced him to 6 years in the general regime penal colony. He was also forbidden to administer websites for 2 years.

The Crimean was sent to serve his sentence in the colony No. 3 of Kabardino-Balkaria (Russia), located 7 kilometers far from Nalchik, this being a violation of Article 49-1 of the Geneva Convention of August 12, 1949 relative to the protection of civilian persons in time of war.

According to the lawyer, for a short period of time, Yevgeniy Karakashev was twice punished for dress infraction, with 15 days in the punishment cell each time. Then he was declared a habitual offender of the sentence serving procedure and assigned 1 year of single prison cell.

“Regarding this, we have filed an administrative claim statement. We will fight and prove that all this is groundless and has nothing to do with the law. When he arrived at the colony, he was immediately told that he would not be moved to the residential area, but from the quarantine room would be immediately sent to the cell, using certain procedures. The reason for this: he is proactively recorded as an extremist terrorist. I have information that now he is in the cell for two. “Terrorists” are isolated in this colony. If a person is in the single prison cell, then the number of visits and parcels is severely reduced. The relatives have sent him one parcel, but when I was there, it has not reached him yet. Only letters from the mother since no parcels are transferred to those who in the punishment cell. Hope, he has finally received it. After my visit to the colony I have addressed everybody to write letters to Yevgeniy, he needs support so much in the isolation’, the Ukrainian’s lawyer said.