On November 15th the Crimean Human Rights Group (CHRG) was again notified by the Roskomnadzor that the organization website articles had been included into the register of information forbidden in the RF.

The Roskomnadzor has been sending such notices to the CHRG e-address since May 8th 2018. For this period, the Russian agency has notified a ban on 13 publications of the Crimean Human Rights Group website. All the publications refer to an unlawful conscription in Crimea. These articles, according to rulings of ‘Yevpatoria Town Court’, have been included into the register of websites containing the information forbidden in the RF. 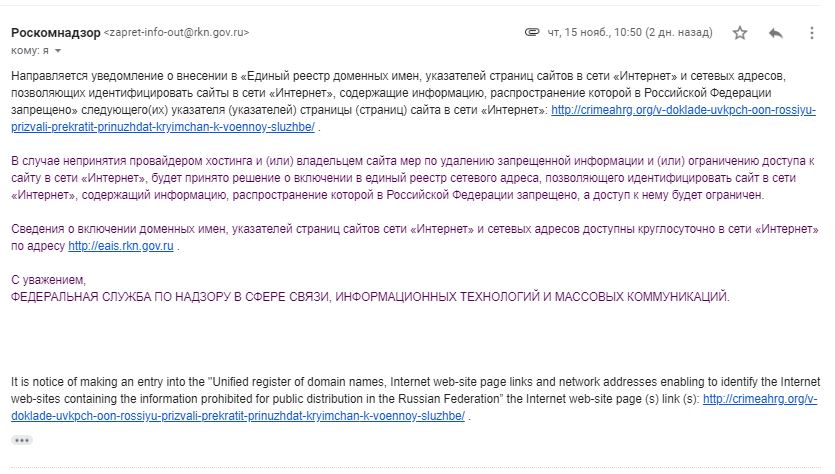 Ms Antonina P. Lantratova, a ‘judge’, issued 12 decisions on forbidding the CHRG publications. The information about the sessions on these cases has been published on the ‘court’ website, though there are no decisions themselves. One more decision was issued by ‘judge’ Igor N. Vil’khovyi. It was published at the ‘court’ website and presented a ban of the article ‘Russia Called to Stop Enforcing the Crimeans to Military Service in the UN OHCHR Report’ placed at the CHRG website on December 13th 2017.

The document states that a deputy military prosecutor of Military Unit 32015 had placed a claim on forbidding the CHRG information.

‘The applicant considers that this information on the website is unlawful, breaks the Russian Federation constitutional fundamentals, creates prerequisites for destroying the federative system of the country, its territory integrity and inviolability, provokes the public to commit wrongful acts including the crimes under RF CC Article 29, encroaching on the constitutional system fundamentals and security of the state.

Disseminating such information contradicts the purposes and objectives of the valid laws, it shall be forbidden for disseminating on the territory of the Russian Federation, while access to the networks where such information documents are placed, supports in fact committing the wrongful acts and the crimes, violating thereby the public interests of the Russian Federation and the rights of the public.

To ensure the principle of the country’s federal system sanctity, its territory integrity and inviolability, and to meet the provisions of the valid laws on defense, this information shall be forbidden’, the court decision states.

‘Judge’ Vil’khovyi agreed with the prosecutor’s arguments and took a decision on forbidding this article on the RF territory.

‘Actions on forbidding the information socially significant for the Crimeans is one more evidence for eliminating the freedom of expression in Crimea and introducing a severe censorship of the RF authorities in all spheres of the peninsula public life’, Ms Irina Siedova, a CHRG media coordinator, thinks.

All the Roskomnadzor notices received by the CHRG state that if the forbidden publications are not deleted from the website, the entire resource will be blocked on the RF territory. According to the CHRG information, at least one provider has been blocking the organization’s website now in Crimea.

‘There is no official information on blocking the CHRG website at the RF official bodies’ websites. Such blocking may be a provider’s overreach. IF we receive any evidence of the CHRG website blocking by the RF authorities, such actions will be appealed against, including the international institutions,’ the human rights expert declared.