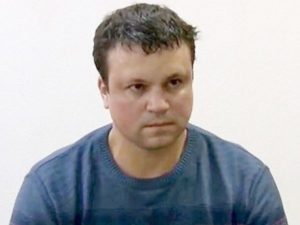 Ukrainian Aleksey Stogniy returned home after serving his term in the Russian colony. This was reported by his wife Oksana Stogniy on her social network page. She thanked everyone who had been with her at this difficult time for the family.

Let us recall: Mr. Aleksey Stogniy, a Ukrainian national, was sentenced to 3 years and 6 months in prison by the Kremlin controlled ‘Kievsky District Court of Simferopol” on July 17, 2017. The Sevastopol City resident was charged with RF CC[1] Article 222-1 (Unlawful procurement, transfer, sales, storage, transportation or carrying of arms, their main parts, and ammunition) and Article 223-1 (Unlawful manufacture, remodelling or repairs of firearms and ammunition).

The criminal articles Mr. Aleksey Stogniy, a defendant of so called ‘Case of Ukrainian Commandos’ was convicted on, have nothing in common with the espionage and sabotage that the FSB accused of the Ukrainian first. However, the RUSSIA 1 Russian Public TV Channel published a video in the November 2016 piece, with Aleksey ‘making a confession’ in spying in favour of Ukraine during the staged interrogation. The video was taken in violation of both the international and Russian law, because we can see only the detainee himself, but there is no lawyer and investigator asking questions.

According to the information of Aleksey’s wife, Mrs. Oksana Stogniy, her husband was detained overnight into November 15, 2016 at the Russian Kalanchak checkpoint when departing from Crimea to Kyiv for his daughter’s birthday. The next day, unlawful searches were carried out at his home and in his shop, pretending ‘to inspect the premises for presence of unlawful items, though nothing was found, and desktops and laptops were withdrawn. The Stogniy family was not explained the reason of detaining Aleksey.

[1] Criminal Code of the Russian Federation