Главная → News → Ukrainian, whom the Russian media called a saboteur, was sentenced in Crimea for 3 years 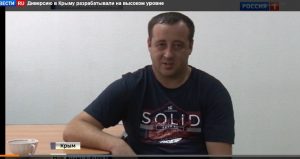 Vladimir Prisich, who was called a spy of Ukrainian intelligence in Crimea by Russian media in August 2016, on 18 May, 2017 was sentenced to 3 years in prison. The verdict was made by the judge of the Gagarinsky District Court of Sevastopol, Kryllo Pavel Valerievich.

The criminal article on which the Kharkiv citizen was convicted has nothing to do with the “case of Ukrainian saboteurs”. At the same time, a video was published in the TV channel of the Russian state television channel “Russia 24” in August 2016, during which Vladimir Prisich gives confessions of espionage during the interrogation.

In the TV-program Vladimir is also accused of being an accomplice of “Ukrainian saboteurs” detained by the FSS on the border with Crimea in early August 2016.

During the court session, Vladimir Prisich said that he gave all the confessions under torture.

In the verdict, a copy of which is available to the Crimean human rights group, it is said that Vladimir Prisich was found guilty under Part 2 of Article 228 of the Criminal Code of the Russian Federation (Illegal acquisition, storage, transportation, manufacturing, processing of narcotic drugs).

Speaking in court with the last word, the Ukrainian stated that all charges of storage and transportation of drugs were fabricated by the FSS after the accusation of espionage completely collapsed.

“With the charges against me, I do not agree in full, because I am absolutely innocent, there is no my fault in the incriminated crime, because I am accused of trying to impose crime elements on the FSS, who consider me a spy, but they could not prove it and decided to isolate me from society by a frank provocation – the “sudden appearance” of a drug package in my car’s cabin in half a day from the moment of my actual detention, ” – stated Prisich.

Vladimir Prisich told the court that he was detained on 13 August, 2016 at 11:30 am in Sevastopol. He said that after the detention he had all the things taken away, he was putted a bag on his head and he was driven to Simferopol. After that, he was tortured with electric current, thus forcing him to confess to the camera in espionage. In the evening, FSS officers brought the Ukrainian to Sevastopol after 21:00 the same day and allegedly found joints with marijuana in his truck. Prisich claims that drugs were thrown into his car after he was detained, because his car keys were seized in the morning.

Prisich also told the court that after the drugs were found, the investigator himself filled out the report with confessions and forced Prisich to sign it in order to avoid a more serious charge of espionage.

However, the court did not take into account all evidence, including testimonies, partially confirming the words of the accused.

Ukrainian’s lawyers said that the case was completely fabricated by Russian special services and filed an appeal with the demand to fully justify Prisich.

Recall that in the period from August to November 2016 in Crimea 9 citizens of Ukraine were detained, and the FSS calls them “members of the sabotage and terrorist group of the Ministry of Defence of Ukraine.” Among the detainees: Evgeny Panov, Andrei Zakhtey, Redvan Suleymanov, Vladimir Prisich, Dmitry Shtyblikov, Alexei Bessarabov, Vladimir Dudka, Gleb Shably and Alexei Stogniy.

The Crimean human rights group has repeatedly stated that citizens of Ukraine detained in Crimea during the period from August to November 2016 in the case of the so-called “Ukrainian saboteurs” are imprisoned for political reasons, violating fundamental rights and freedoms, and therefore are political prisoners.

On 22 May, the lawyer of Yevgeniy Panov and Alexei Stognya’s wife reported new falsifications in the case.