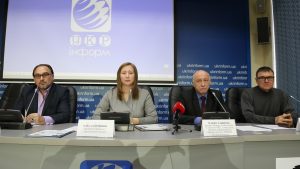 Ukrainian citizens that were detained in Crimea in the period from August to November 2016 in so-called case of “Ukrainian saboteurs”, are being imprisoned for political reasons, in violation of fundamental rights and freedoms. This makes it possible to consider them as political prisoners on the basis of international legal norms.

That is the conclusion that was reached by the experts of the Crimean Human Rights Group (CHRG). Since August 2016, they record and analyse information on the case of the so-called “Ukrainian saboteurs.” Today, the names of 10 detainees in this case are known.

However, we can assume with a high degree of probability that there are more detained, as Russian media reported with reference to the FSS the arrest of 9 people in August.

Russian media have published videos – fragments of operational filming of the FSS, in which some of the “Ukrainian saboteurs” give “confessions” against themselves.

Candidate of Legal Sciences, Associate Professor, lawyer Yury Grishin analyzed the content of these videos and pointed out a number of gross violations of criminal procedural legislation of the Russian Federation de facto acting in Crimea. “During the interrogation the “saboteurs” were repeatedly asked leading questions that already have the answer. Interrogations are carried out without the defenders. Produced video does not contain any video capture of all the participants of the investigative action, although it is one of the compulsory conditions of its creation, “- said Grishin.

“That means, the investigators are going to use inadmissible evidence. The foregoing circumstances, with high probability, suggests that “the Ukrainian saboteurs” give false testimony, perjure themselves as a result of the application of illegal methods of investigation to them”, – said the expert.

Pavel Lakiychuk, the expert at the Centre of Global Studies “Strategy XXI”, a former head of the Information Programs of the NOMOS Center, who personally knows Alexey Bessarabov and Dmitry Shtyblikov, provided biographical information about the defendants in the case of “Ukrainian saboteurs.” The expert pointed out an interesting detail in the biography of Gleb Chablis and suggested that the target of the FSS can be rear-admiral of the Ukrainian Navy Vladimir Anisimovich Kolpakov as Shabliy is his close relative.

Lakiychuk is fully convinced of the innocence of his former colleagues. “New Crimean saboteurs” are united only by the year of birth and training time in the military educational institutions of Ukraine. Maybe they knew each other, but to unite them in the “Ukrainian subversive and terrorist group” – is absurd, “- stated the former head of the NOMOS. 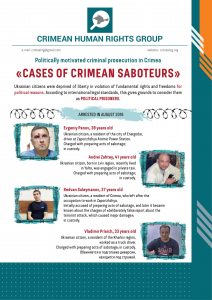 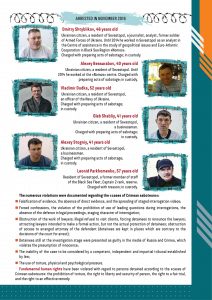 The head of the Crimean Human Rights Group Olga Skripnik reported about numerous violations that were recorded by experts and lawyers of the CHRG regarding “Crimean saboteurs”:

– Falsification of evidence, the absence of direct evidence, spreading of the staged interrogation videos;

– Forced confessions, the absence of the defence in legal proceedings, staging character of interrogation;

– Obstruction of the work of lawyers: illegal refusal to visit clients, forcing detainees to the withdrawal of the lawyers on the invitation; involvement of court-appointed lawyers, which operate formally, without providing actual protection of detainees; creation of barriers in access of lawyers at the invitation to the defendant (detainees are kept in those pre-detention centres or prisons, which are contrary to the decisions of the court for arrest);

– Positioning of the detainees still at the investigation stage in the information field of Russia and Crimea as perpetrators, which violates the presumption of innocence;

– The inability to study the case by a competent, independent and impartial court, acting on the basis of the law;

– The use of torture, physical and psychological pressure.

“The so-called “saboteurs case” has become widespread since the persecution is carried out not against one person but against a group of people, and not only regarding those who constantly live in Crimea, but also regarding Ukrainians, temporarily being there.

With regard to persons detained according to the “cases of Crimean saboteurs” fundamental human rights have been violated: the prohibition of torture, the right to liberty and security of person, the right to a fair trial, the right to an effective remedy “, – summed up Olga Skrypnyk.

Igor Kotelyanets brother of Evgeniy Panov, urged all who are not indifferent to the fate of the Ukrainians, deprived of their liberty by the Russian Federation, not to forget them and try to morally support them. In particular, he proposed to send a letter or postcard to his brother at PO BOX 201 5 Lefortovo shaft, Moscow 111020, Russian Federation to Panov Evgeny, DOB 06.06.1977.