Ukrainians, Crimean Tatars, members or supporters of Mejlis of the Crimean Tatar people, activists of EuroMaidan, Muslims and migrants are the main groups against which the hate speech was used in Crimea information space.

This is evidenced by the data of the study of hate speech in the media landscape of the occupied Crimea, conducted by Ukrainian human rights organizations.

Analytical report “Hate Speech in the Media Landscape of Crimea“ was presented in Kyiv on 28 March. Authors of the report – Crimean human rights group and Human Rights Information Centre – investigated the evening news releases “Russia 1”, “NTV” and “Pervyi Kanal” for the spring of 2014 and the spring of 2017. Also, the content of the Crimean media sites and the occupation authorities from March to October 2014 and from January to July 2017 was analysed.

In total, 718 examples of inciting hatred were recorded in the studied content. 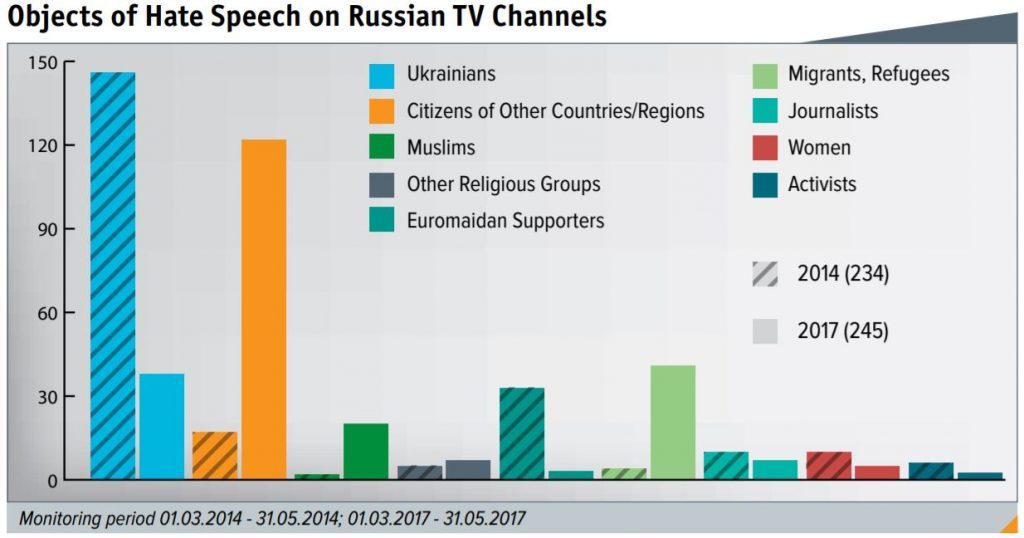 Most of all, the media and websites of the “state bodies” of Crimea incited hatred towards national and ethnic groups of people and residents of certain territories. The study identified 36 of such groups. In general, Ukrainians (as an ethnic group and / or as a civil community) living in a territory controlled by the Ukrainian authorities became the objects of hatred among these groups. 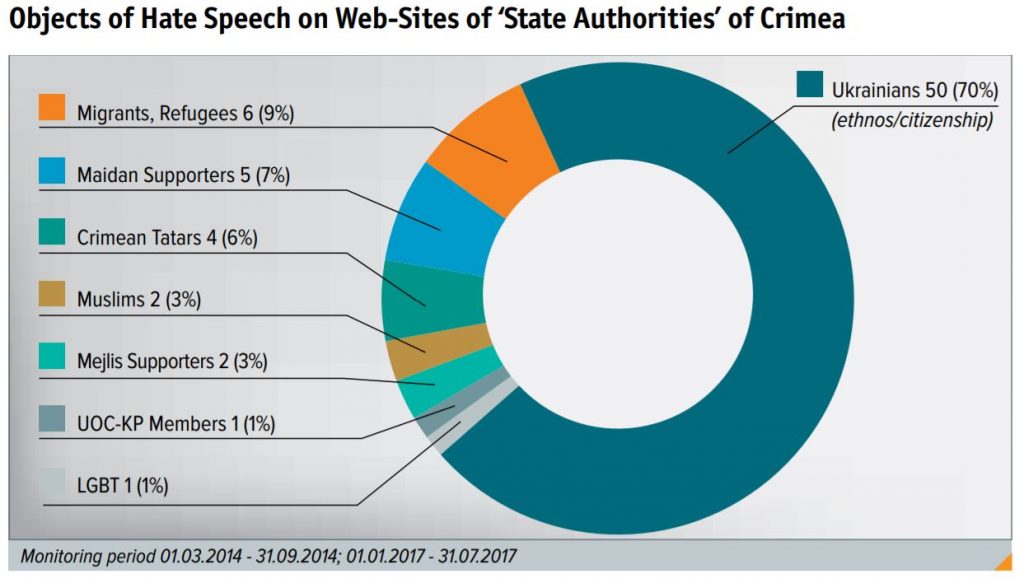 The report shows some examples of incitement to hatred, among which are explicit calls for the liquidation of Ukrainians.

“Mass use of the hate speech in the media landscape of Crimea grossly violates Ukrainian and international law standards and journalistic standards,” said Tatyana Pechonchik, head of the Human Rights Information Centre. – The incitement of hatred towards Ukrainians, Crimean Tatars and Muslims inside Crimea creates the basis for hate crimes. In the eyes of society controlled hatred legitimizes repression against activists, dissatisfied with the actions of the authorities. The effect of the spreading of hate publications is greatly amplified due to the severe restrictions on freedom of speech on the peninsula. ”

As the conducted monitoring showed, the language of enmity is used even in normative legal acts, texts with the use of hate speech are constantly published on the official websites of the occupation authorities of the peninsula. The main object of inciting hatred in all these cases are Ukrainians, both on the basis of citizenship and ethnicity.

“Taking into account Russia’s participation in the international armed conflict with Ukraine, it can be concluded that the above examples of inciting hatred towards Ukrainians with the involvement of state resources are one of the instruments of warfare,” said Irina Siedova, a researcher of the Crimean Human Rights Group.

The authors of the report recommend that the government of Ukraine take all necessary measures that can help improve the situation. In particular, human rights defenders recommend the Prosecutor’s Office of the Autonomous Republic of Crimea to launch criminal proceedings against those guilty of inciting hatred in the peninsula. The authors recommend to use the information collected in the report as evidence in the International Court of the United Nations, as confirmation of ethnic discrimination on the peninsula.

“Those who are guilty of inciting hatred, calls for discrimination, propaganda of violence using administrative, financial and other resources of the Russian and occupation authorities should be prosecuted and punished proportionately,”  – the authors of the report said.