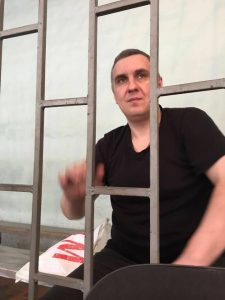 Recall, that on June 2, the “judge” of the “Kiev District Court” of Simferopol Tsykurenko Anton Sergeevich extended the detention of Ukrainian citizen Evgeny Panov for two months – until August 7, 2017.

At the beginning of March 2017, the “Kiev District Court” of Simferopol, at the request of the investigator, extended the term of detention of the defendants of the “Crimean saboteurs case” Evgeny Panov and Andrei Zakhtei for three months, until June 7, 2017. Panov’s defence appealed against this decision, but there were no results.

On August 10, 2016, the FSS of Russia reported that on the night of August 7, 2016 in the annexed Crimea a group of “Ukrainian saboteurs” who allegedly were preparing terrorist attacks on the peninsula was detained. Evgeny Panov has repeatedly stated that he was subjected to torture and psychological pressure to obtain “confessions”.

However, the Investigative Committee of the Russian Federation refused to initiate a criminal investigation into the torture of the Ukrainian after the pre-investigation investigation. Defenders of Panov reported that they are going to appeal this refusal.

The detainees Panov and Zakhtei were kept for some time in the Moscow Lefortovo prison, later – they were returned to Crimea. According to lawyers, this step of the Russian special services is connected with the desire to complicate procedurally the protection of Ukrainians.