These are findings of the Crimean Human Rights Group July 2018 monitoring.

The monitoring group checked the operation of 4 Ukrainian FM radio stations which broadcasting to Crimea had been announced at the Ministry of Information Policy of Ukraine (MIP) in the early 2017. According to MIP information, on March 17th 2017 a 150m high tower mounted in the village of Chongar, was launched. Four Ukrainian radio stations:

started using it for broadcasting.

The CHRG monitors checked the broadcasting of these radio stations in July 2018 in the area of KALANCHAK Border Check Point, and in 13 settlements in northern Crimea. The check was done with FM receivers in the car audios as well as with an FM receiver embedded audio player.

As to all settlements, only on the section between Voinka and Kalinovka a good quality signal of UKRAINIAN RADIO at 100.7FM could be heard. 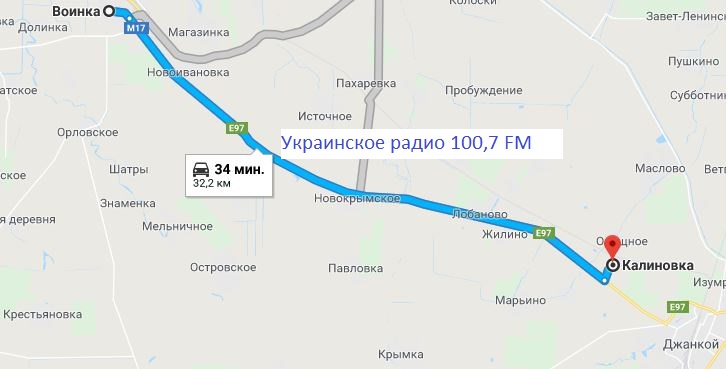 In the settlements of Vishnevka, Krepkoye, Krasnoarmeyaskoye, and Voinka a UKRAINIAN RADIO signal was also heard with a standard player. However, the car audio could not receive this signal, receiving instead a signal of SPUTNIK V KRYMU radio station subordinate to the Russian authorities.

In all other settlements the pro-Russian SPUTNIK V KRYMU radio station broadcasts at 100.7FM channel instead of UKRAINIAN RADIO. 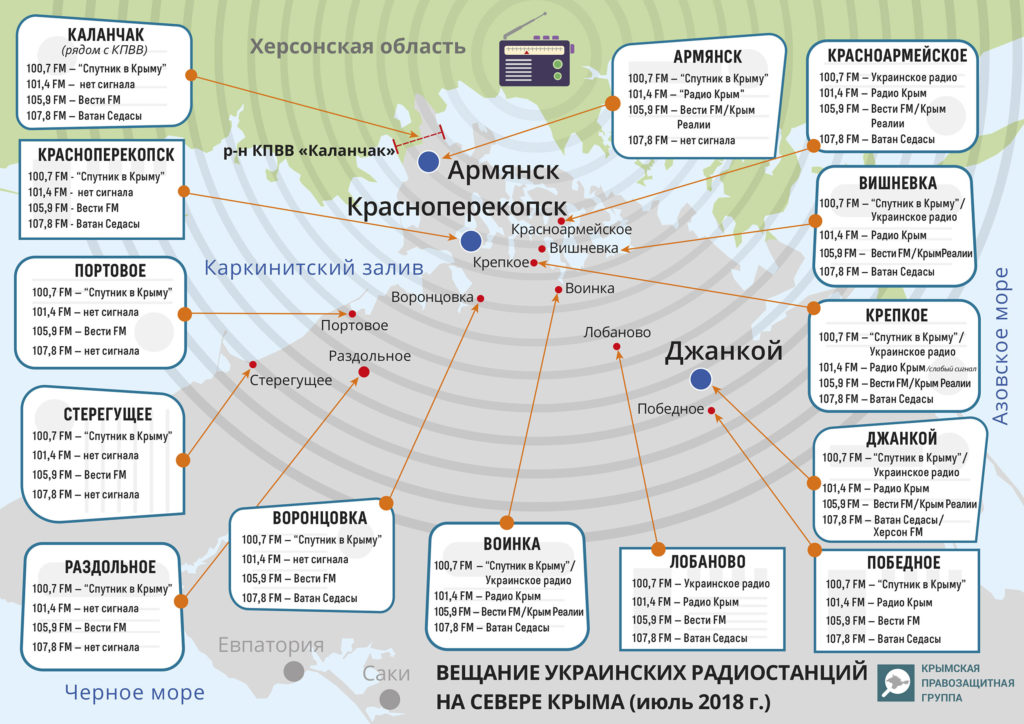 As to the frequency granted to Ukrainian KHERSON FM (107.8FM) radio station, the pro-Russian Crimean Tatar VATAN SEDASY radio station broadcasts at it in 11 Northern Crimean settlements. The signal of KHERSON FM radio may be heard, though the quality is very bad, in Dzhankoy and partially in Krasnoperekopsk District. There is no broadcasting at all at this frequency in villages of Razdolnoye and Stereguschiy.

The CHRG monitoring group was at the Crimean border in the area of KALANCHAK Border Check Point, at the peninsula side. There is no broadcasting of Ukrainian FM stations in this part of Crimea, and Russian radio stations operate at all checked frequencies.

In addition, in the village of Novoalekseyevka, Genichesk District, Kherson Region, a signal of Russian KRYM radio station is heard at a frequency of 101.4FM instead of MEYDAN radio signal. The pro-Russian KRYM radio can be heard time to time at the same frequency on the Ukraine controlled territory in the area of Arabat Spit. KHERSON FM radio can be heard at a frequency of 107.8FM in the area of CHONGAR Border Check Point at the both sides of separation line.

Radio wave propagation may change depending on weather conditions, so broadcasting of different stations may be heard on different days in the same settlements when the same frequency or adjacent frequencies is/are used. It should be noted that in the same settlement different radio stations may be heard at different receivers. However, a radio station which transmitter capacity is higher or which transmitting tower is located closer or on the radio line of sight, dominates.

This being said, it is worth mentioning that a good signal of Ukrainian radio stations could be heard all over the Northern Crimea six months ago.

Based on the monitoring findings it may be concluded that the Crimean occupational powers have been jamming recently a signal of Ukrainian broadcasters by putting on the Russian radio stations at the same frequencies.