Главная → Analytics → What evidence of unlawful conscription to the RF Armed Forces in Crimea has been presented to the International Criminal Court? (infographic)

For the period of occupation the RF has launched 7 army conscription campaigns for the Crimean residents. Drafting the occupied territory residents to the occupying power’s army constitutes a war crime, and the evidence of this crime has been sent to the International Criminal Court. 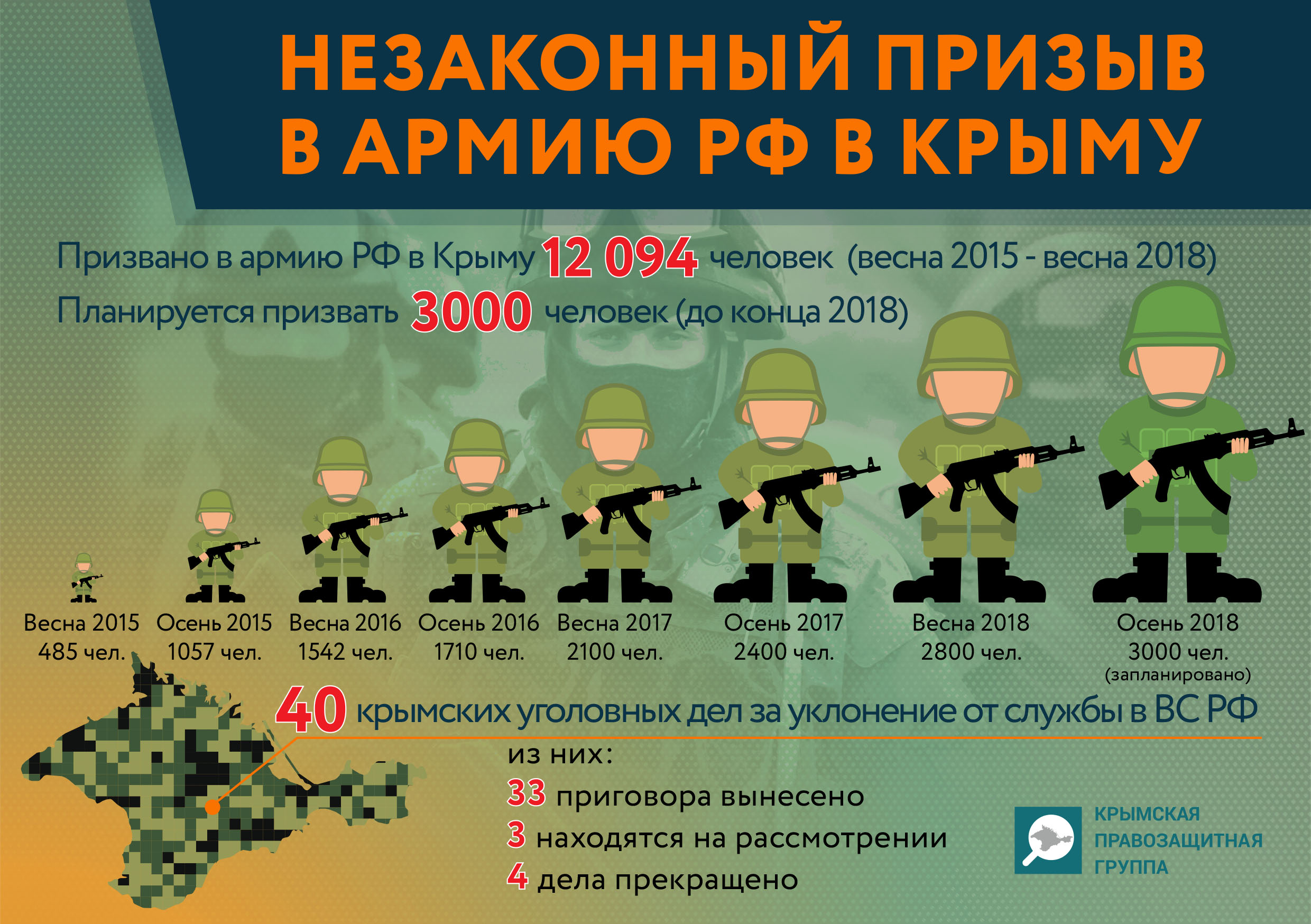 The Crimean Human Rights Group, together with the Prosecutor’s Office of the Autonomous Republic of Crimea, the Regional Center for Human Rights, and the Ukrainian Helsinki Human Rights Union have presented to the ICC various evidence collected during this crime investigation.

Mr Aleksandr Sedov, a CHRG analyst, informed about the work of CHRG experts on collecting this evidence:

‘We have collected 165 legal and regulative documents related to conscription campaigns in Crimea. These documents are issued both by the RF authorities and the representatives of so called ‘administration’ on the occupied peninsula subordinate to the Kremlin. In addition, we have collected 199 publications verifying the drafting in Crimea and stating the number of Crimean drafted to the RF Armed Forces.

We have also reviewed almost 2000 pages in the social networks. As a result, we have found several dozens of draft notices signed by chief enlistment officers on the occupied territory, medals awarded to the Crimean residents for participation in the Syrian military campaign, and several merit certificates handed to the Crimeans by the RF military unit commanders.

Drafting the Crimeans to the RF Armed Forces constitutes a gross violation of international humanitarian law.

Drafting the residents of occupied territories to the occupying power’s army as well as a continuous propaganda of the service in the RF Armed Forces on the territory of Crimea violate Article 51 of the Convention relative to the Protection of Civilian Persons in Time of War (the Fourth Convention), while transfer of the drafted Ukrainian nationals from the occupied territory to the RF territory flouts its Article 49.

The evidence of unlawful conscription to the RF Armed Forces in Crimea has been received already by the Prosecutor’s Office of the International Criminal Court. The CHRG experts do hope that these files would support the ICC prosecutor to open an investigation on Ukraine, including the war crimes in Crimea.