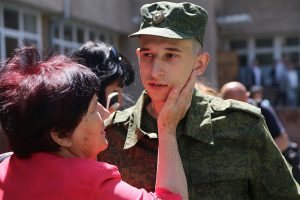 Starting from 1 April, a spring campaign began on the military conscription of the residents of Crimea in the ranks of the armed forces of the Russian Federation.

The practice of military conscription of the citizens of the occupied territories to the ranks of the army of the occupying power, as well as the continuing propagation of service in the Armed Forces of the Russian Federation violate Article 51 of the Convention on the Protection of Civilian Persons in Time of War (Fourth Geneva Convention), and the movement of the citizens of Ukraine from the occupied territory to the territory of the Russian Federation violates Article 49 of this Convention.

According to Igor Mikhailichenko, deputy chairman of the Council of Ministers of Crimea, four conscripts were held since the time of the occupation till January 2017, as a result of which more than 4 thousand Crimean citizens were drafted into the troops of the Southern Military District and Federal National Guard Troops Service.

Earlier, the “Military Commissioner” of Crimea Anatoly Maloletko said that a criminal case was opened against one of the Crimean residents for evading conscription into the Russian army.

Recall, the Ukrainian Foreign Ministry expressed a strong protest in connection with the call of the Crimean residents in the Russian army. Ukraine demanded that the Russian Federation abolish the call for military service of citizens residing in the temporarily occupied territory of the Autonomous Republic of Crimea and the city of Sevastopol, and ensure that the Russian side strictly observes its international obligations.