Главная → News → What crimes in Crimea will the International Criminal Court investigate?

The International Criminal Court’s Office of the Prosecutor issued an annual report, which states that a preliminary examination into the situation in Ukraine has been completed. The report details the types of war crimes committed in Crimea, which the court intends to investigate.

“Since February 2014, in the period before and/or in the context of the occupation of the territory of Crimea, the following war crimes have been committed:

— compelling protected persons to serve in the forces of a hostile Power under Article 8 (2) (a) (v);

— wilfully depriving a protected person of the rights of fair and regular trial under Article 8 (2) (a) (vi);

— transfer of part of the population of the occupied territory outside this territory (in relation to the transfer of detainees in criminal proceedings and prisoners) under Article 8 (2) (b) (viii); 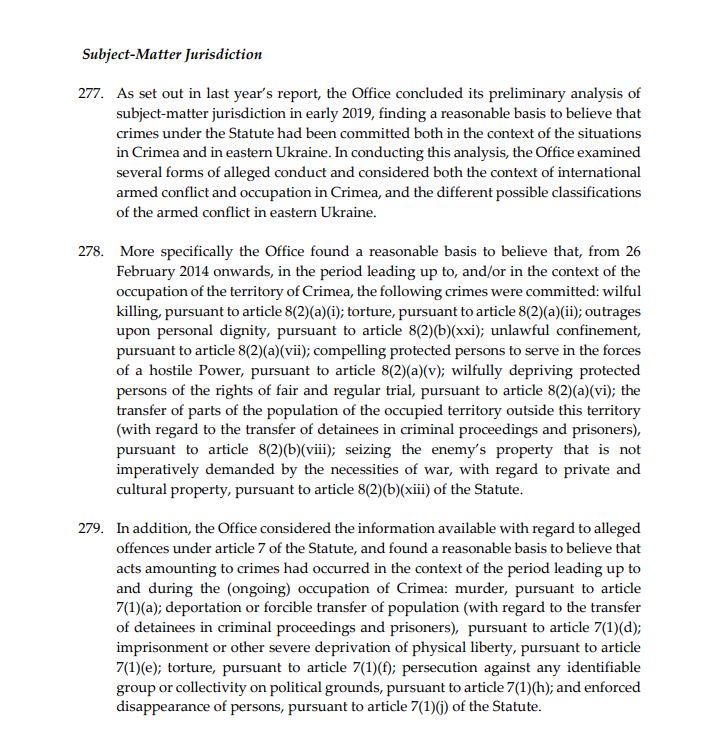 — seizing the enemy’s property not justified by military necessity in relation to personal and cultural property under Article 8 (2) (b) (xiii) of the Statute”, — the report says.

In addition, the court examined the information available in relation to the alleged crimes under Article 7 of the Statute (crimes against humanity).

“The court concluded that there is a reasonable basis to believe that a broad range of conduct constituting crimes took place in the period preceding and during the (ongoing) occupation of Crimea:

— deportation or forcible transfer of population (in relation to the transfer of detainees in criminal proceedings and prisoners) under Article 7 (1) (d);

— imprisonment or other severe deprivation of physical liberty under Article 7 (1) (e);

— persecution of any identifiable group or community for political reasons under Article 7 (1) (h);

— enforced disappearance of persons under Article 7 (1) (j) of the Statute”, — the report says.

The document states that the identified potential cases were of sufficient severity given their scale, nature, order of occurrence and impact, taking into account both quantitative and/or qualitative factors.

We would like to remind readers that, on 11 September, the International Criminal Court Prosecutor, Fatou Bensouda, reported that her Office had already collected and filed all the documents with the court that will allow obtaining permission to investigate the situation in Ukraine. Fatou Bensouda suggested that the next step will be to request authorisation from the Judges of the Pre-Trial Chamber of the Court to open investigations.

Earlier, the Crimean Human Rights Group collected evidences and, together with the Prosecutor’s Office of the Autonomous Republic of Crimea, sent two reports to the International Criminal Court on such war crimes as the illegal conscription of Crimean residents into the Russian Armed Forces and the propaganda of such a conscription, in particular among Crimean children.