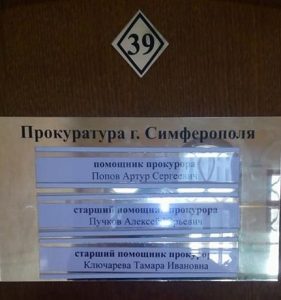 Activists of the Ukrainian Cultural Centre in Crimea, Alena Popova and Olga Pavlenko, were summoned for the “conversation” by Alexei Puchkov who is the senior assistant of the “prosecutor” of Simferopol.

The employee of the Russian Prosecutor’s Office was interested in the work of the Centre and the issue of the newspaper “Krymsky teren”. Activists took advantage of the right not to testify against themselves and their loved ones.

This is not the first time when Crimean citizens that participate in the Ukrainian Centre are summoned to the authorities for interrogation and “preventive talks”.

The Ukrainian cultural centre of Crimea is not a political organization. It was created by activists in order to preserve and popularize the Ukrainian culture on the peninsula. However, the de facto authorities of Crimea are constantly make pressure on participants of the Centre: they forbid the holding of public events, call for interrogations and “conversations” with law enforcement bodies, warn about the inadmissibility of extremism and so on. One of the leaders of the Ukrainian Cultural Centre in Crimea Leonid Kuzmin had to leave the peninsula in 2017 after threats and pressure from the security officials.

According to the experts of the Crimean Human Rights Group, thus, the Ukrainian authorities in Crimea are systematically under the pressure of the power bodies of the occupation authorities, organized to end the activities of the Ukrainian Cultural Centre through persecution of its participants.