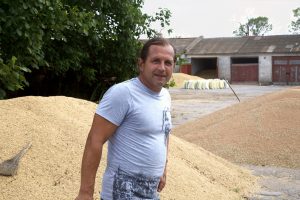 On the morning of 8 December the Russian Federal Security Service officers came with searches to the village Serebryanka of Razdolnenskiy region of Crimea. The searches were carried out for 4 hours in the homes of Ukrainian activist Vladimir Balukh and his mother. After the searches the activist was detained.

This was reported to the Crimean human rights group by the wife of Balukh. The Russian Federal Security Service reported that 90 rounds of ammunition and some TNT blocks were found in the attic of the house where Vladimir Balukh lives. Relatives believe that the ammunition was thrown in by Russian Federal Security Service officers during a search.

Today the judgment on the election of a preventive measure against the activist was supposed to take place. At the moment, it is known that Vladimir Balukh is in Razdolnensky pre-detention centre.

Vladimir Balukh – an activist known for his pro-Ukrainian position. Crimean human rights group previously reported that police have already conducted two searches in the house of Balukh and his relatives. The first search took place in April 2015. During this search Ukrainian flag was taken from the roof of the house. After the second search, the Ukrainian was accused of insulting a police officer Eugene Baranov and sentenced to 320 hours of compulsory labour.

On 29 November, 2016 Vladimir Balukh posted a sign “the street of the Heaven’s Hundred Heroes 18” on the wall of his house. After that, the village council chairman Stepaniuk Vitaliy came to his home threatening to call the police