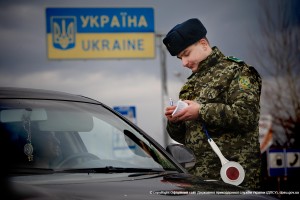 The citizen of Ukraine Gennadiy B. declares of infringement of his rights by the Border Service of Ukraine.

Gennadiy lives in Crimea, but he is being constantly on the mainland territory of Ukraine on his private transport. The officers of the Border Service of Ukraine at the crossing point on Kalanchak refused to pass his vehicle through the administrative border attempting to exit Crimea to the mainland Ukraine on December 30, 2015.

Gennadiy’s vehicle has Ukrainian license plate, and the owner is a citizen of Ukraine. The driver did not commit freight or passenger traffic. The man tried to leave Crimea by the cargo- passenger type Ford Transit.O

“The number of seats is 9 in it, but in fact – 7. The border guards did not immediately grant the written reason of the failure, and had done so only after my written request,” – said Gennadiy B. 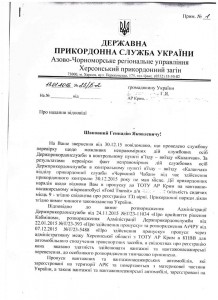 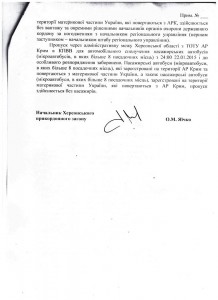 A copy of the report of the Ukrainian from the Border Service of Ukraine, which is available to the Crimean human rights group, is indicated the following:

“…the border crossing of the trucks and utility vehicles, which are registered on the territory of the Autonomous Republic of Crimea and returned from the mainland of Ukraine, as well as trucks, utility vehicles, registered in the mainland of Ukraine, which are returned from ARC is being decided on separately decisions by  enforcement agencies chiefs of the State border in coordination with the head of regional administration (the first deputy – chief of staff of a regional government) …”.

In addition, the Border Service reported that “… the border crossing through the administrative border  of Kherson region with  the Crimea in the CPEE for road transport buses (minibuses, in which more than 8 seats) is prohibited from 24:00 01.21.2015 and untill further notice “.

At the same time the ministry did not answer which Laws of Ukraine and Decisions of the Cabinet of Ministers of Ukraine these prohibitions had approved.

The Ukrainian considers such actions of the border guards as illegal. So he decided to assert his right to freedom of movement in the court and to appeal to the assistance of the lawyers of the Crimean Human Rights Group (CHRG). Previously the experts of the CHRG reported about unreasonable and illegal restrictions with regard to the drivers from the Ukrainian border guards on monthly review.

The lawyers of the CHRG helped Gennadiy B. to make a claim, in which the Ukrainian demanded to admit the actions of the Border Service of Ukraine unlawful. The requirement to undertake the appropriate action to prevent   illegal actions of the officers of the Border Service of Ukraine is contained in the claim- namely, not to pass minibus through Crimea n border from the mainland Ukraine.

The Border Service of Ukraine infringes the right of Ukrainian citizens to freedom of movement and the right to use private property by its actions, the experts of the CHRG consider.

“Such prohibitions on the movement of the vehicles being in the private property of individuals have to be passed only in accordince with the Laws of Ukraine. The references to prohibitoins approved by the laws of Ukraine did not contain in  the answer which the Border Service of Ukraine sent to Gennadiy B. . In addition, the norms with such prohibitions don’t exist in the the law “on the temporally occupied territory” and the Decisions of the Cabinet of Ministers. In this regard, the actions of the Border Service of Ukraine in this case are exceeding official authority  “, -the experts of the CHRG consider.

In addition , the experts of the CHRG say that the replacement of concepts takes place in this case, the business activity in the form of services for the transportation of passengers or cargo – this is  one, and private property, including the use of your car for private purposes – this is another. That is, if there is a limitation to delivery of cargoes, it relates to the services and the goods traffic, but it does not touch the empty freight car types, if they are used in personal purposes as a vehicle.

The Crimean Human Right Group provides free legal assistance to the citizens of Ukraine (including drafting claims), who has gotten himself or herself into the similar situation. For legal aid, please use e-mail [email protected] on this issue.