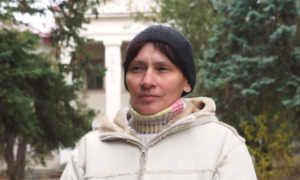 The spouse of Mr Volodymyr Balukh, a Ukrainian political prisoner, visited him for the first time in the Simferopol Detention Center on October 17th, 2018, before his being convoyed to the penal colony.

According to her information, Mr Balukh is to be convoyed to the Kerch penal colony today, on October 18th 2018 (‘Penal Colony # 2 of the Federal Penitentiary Service Department for Republic of Crimea and Sevastopol City’, Address: 298330, 17 Industrialnoye Shosse, Kerch).

Mrs Balukh told the CHRG that the visit to Simferopol Detention Center had been short, she had seen the husband separated with glass and spoke with him on phone for about one hour and a half.

‘When I was waiting for the meeting at the Detention Center, my nerves failed and I started crying. But once I saw Vova I felt better the same while and tears dried off themselves’, the woman said.

According to her words, Volodymyr keeps up despite the health weakened due to the hunger strike. His immunity is poor and he is suffering ARD. In addition to the acute on chronic diseases, he is suffering misery from a toothache. Natalia has delivered the necessary medicines and the foodstuffs for her husband since Mr Balukh has stopped the hunger strike for the time of convoying: porridge, nuts, vegetables, etc.

Volodymyr told the spouse that he was very worried about her health and the health of his old mother and asked Natalia to take care of herself and the mother.

The Ukrainian activist was recently handed the letters from mothers and wives of the Heavenly Hundred heroes. Mr Balukh was deeply touched with this care, and the letters and postcards with supporting words sent to him by caring people help him a lot.

The Crimean asked to express his gratitude to everybody fighting for his freedom, for Ukraine and for other political prisoners.