Главная → News → The case on the fact of beating of Igor Movenko for the Ukrainian symbolism in Crimea has not been filed. 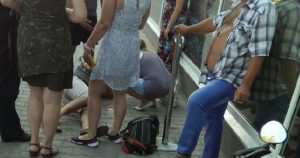 A criminal investigation regarding the beating and inflicting bodily injuries to Igor Movenko in Sevastopol was never filed. This was reported to the Crimean Human Rights Group by Movenko. The lawyer of Igor Movenko learned about it in the Investigative Committee of Sevastopol.

“Finally we decided to make an appeal on my administrative article. And as we have discovered the case regarding the violence against me in the Investigative Committee has not been opened. Writing the letter to the prosecutor “, – Crimean resident reported.

Almost a month ago, on 7 September Movenko was beaten in Sevastopol for the symbol of the battalion “Azov” placed on a bicycle frame. Police and ambulance was called at the scene. Crimean resident was hospitalized. Doctors diagnosed open head injury, concussion, skull base fracture, a broken jaw, a closed fracture of the nasal bone, contusion of the eyeball and other injuries. Now Crimean resident needs surgery to correct the nasal septum. Doctors also recommended Igor to be treated by a neurologist and a dentist. (Medical case history)

According to Igor wife, Valentina Movenko, the one who attacked her husband called himself police officer.

On 22 September in Sevastopol Gagarin District Court a hearing was held during which the beaten in Sevastopol Igor Movenko was fined for 2000 rubles.

The court’s decision on the penalty Movenko decided to appeal.