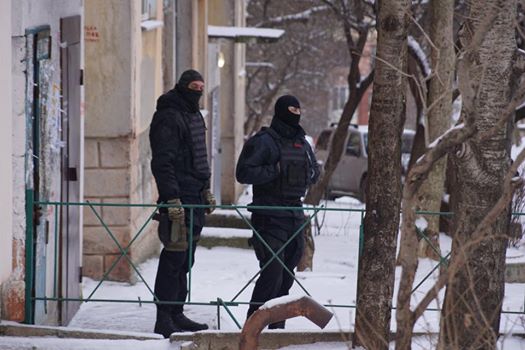 The violent attack against lawyers carrying out their professional duties and defending rights of Ukrainian citizens in the occupied peninsula has been expanding during last two days.

On 25 January, lawyer Nikolai Polozov was detained by FSB officers in Simferopol. It happened immediately after his arrival from the PACE session where he was reporting the facts of political persecution in Crimea. The FSB officers detained him for interrogation in the criminal case against Ilmi Umerov. Since Mr Polozov represents Mr Umerov in this case, he cannot provide witness testimony. Eventually, Mr Polozov was released in 2 and a half hours.

The next day morning, January the 26th, it became known about the abduction of lawyers Edem Semedlyaev and Emil Kurbedinov by representatives of the ‘Center for Combatting Extremism’ (‘Center E’) of the Ministry of internal affairs of the Russian Federation. The lawyers were heading to Bakhchysarai in order to provide legal assistance to the family of a civic activist, Mr Saliev, whose house was being searched since the early morning of that day. The lawyers’ car was stopped by traffic police (‘DPS’) referring to ‘a database check’. Subsequently, officials of “Center E” arrived and declared the ‘administrative detention’ of Emil Kurbedinov.

Emil Kurbedinov was brought to and detained in the premises of the ‘Center for Combatting Extremism’ (‘Center E’) in Simferopol. Later, he was taken to the ‘Zaliznychnii district court of Simferopol’ for an administrative case trial. According to the Kurbedinov’s legal representative, Dzhemil Temishev, Emil is being ‘charged’ with the distribution of ‘extremist materials’. Meanwhile, Russian law enforcement officers carried out unlawful searches in the legal offices of Mr Kurbedinov and Mr Smedlyayev and seized all their equipment, including all the storage devices and documents that are subject to legal advice privilege.

We are firmly convinced that such actions of the Russian security services are the response to their intense activities as human rights lawyers.

The human rights organizations express their strong condemnation of unlawful actions of the representatives of the occupation authorities in Crimea and demand the urgent and unconditional release of Mr Kurbedinov.

Human rights defenders emphasize the international guarantees of legal profession and demand to ensure compliance with such guarantees as to all lawyers, who defend victims of human rights violations and politically prosecuted on Crimean peninsula.

By persecuting Nikolai  Polozov and Emil Kurbedinov—a very few human rights lawyers operating in Crimea—the occupation authorities not only put pressure on the lawyers and obstruct their conduct, but also deprive the Crimeans of the little chance to defend their rights.

FOR THE ABOVE REASONS, WE DEMAND TO TAKE ALL THE POSSIBLE URGENT MEASURES IN RESPONSE TO THE REPRESSIONS AGAINST HUMAN RIGHTS LAWYERS IN CRIMEA