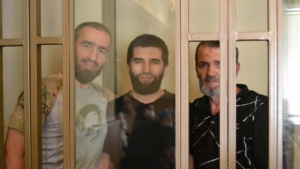 On 11 January 2021, the Southern Military District Court of Rostov-on-Don will hold a final hearing in the trial of Crimean Tatars, Muslims who are citizens of Ukraine. Enver Omerov, Riza Omerov and Ayder Dzhapparov will speak their last word, and in the coming days they will be sentenced. The three men are charged with “conducting terrorist activities” and participating in the activities of the Hizb ut-Tahrir organisation.

All three men, residents of Bilohirsk district of Crimea, were detained on 10 June 2019. Riza Omerov and Ayder Dzhapparov were detained after raids on their homes, and Enver Omerov – on the way to a court hearing in Rostov-on-Don (he is a father-in-law of Rustem Ismayilov, a defendant in the first Simferopol group of the ‘Crimean Muslims case’). Riza Omerov’s wife was taken to a hospital with premature delivery as her waters had broken during the raid. Also on that day, Russian security forces detained five more Crimean Muslims in Alushta and Simferopol districts of Crimea.

Enver Omerov, Riza Omerov and Ayder Dzhapparov supported the Crimean Tatars, who were persecuted by the Russian authorities, and their families. For example, Enver Omerov organised mass festivities for children in Bilohirsk. He provided assistance to compatriots who had previously been affected by reprisals on part of the authorities and law enforcement agencies. He also volunteered, in particular, helping the families of political prisoners and sending parcels with food to prisons for political prisoners.

On 3 June 2020, the Southern Military District Court of Rostov-on-Don began hearing the Bilohirsk group case on the merits. According to the case files, the defendants did not have weapons, explosives, ammunition, did not plan to commit a terrorist act and did not call on others to commit terrorist acts. The case files contain only audio recordings proving that the defendants discussed religious and political topics. In fact, this was the only evidence of commission a “crime.”

It is well known that the Russian Federation has used its anti-terrorist and anti-extremist legislation to suppress dissent in the occupied Crimea not for the first time. Representatives of the Crimean Tatar people, as well as Ukrainians, are the most common victims of persecution. Journalists, lawyers, human rights defenders, civil society activists and other members of civil society are also among the most vulnerable.

According to Ukrainian human rights organisations, the number of political prisoners – Ukrainian citizens jailed in Russia and the occupied Crimea – exceeds 100 people. More than 70 of them are Crimean Tatar Muslims who are being prosecuted on apparently fabricated charges of terrorism and extremism. About 200 children have been deprived of parental care.

We strongly condemn the ongoing persecution of Muslims and Crimean Tatar activists in the temporarily occupied Crimea on trumped-up charges and demand that the government of the Russian Federation must:

We call on international organisations and governments of democracies to:

We address the President of Ukraine, the Verkhovna Rada of Ukraine, the Ministry of Reintegration of the Temporarily Occupied Territories of Ukraine, the Prosecutor’s Office of the Autonomous Republic of Crimea and city of Sevastopol with a request to:

Association of Relatives of the Kremlin Political Prisoners