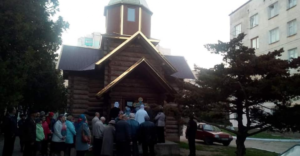 On July 23, 2020 the so-called “bailiffs service” of Crimea handed to archbishop of Simferopol and Crimea of the Orthodox Church of Ukraine (OCU) Clement a resolution on the demolition of the OCU  temple in Yevpatoria.

The decision to demolish the worship house, contrary to international law, was made by “Crimean court” due to the alleged lack of evidence from the defendant, which confirms the “legality of the use of land and buildings” by the religious community of the OCU in Yevpatoria.

This fact is another confirmation of the systemic policy of the Russian Federation in order to destroy the OCU and Ukrainian culture on the occupied peninsula. For instance, last year the pressure on OCU was increased when on the 3d of March 2019 employees of the Ministry of Internal Affairs of the Russian Federation unreasonably detained Archbishop Clement for 7 hours.  Also, in April, the Crimean Department of the Ministry of Justice of the Russian Federation refused to register a local religious organization at the request of Archbishop Clement. On June 8, the “Arbitration Court” of Crimea decided to terminate the lease agreement for the premises where the current cathedral of the OCU was located. The reason was a debt of 2.3 hryvnias (approx. 0,071 EUR). On July 24, 2019, Archbishop Clement announced that all the church utensils of the diocesan administration had been stolen from the Cathedral of Saints Volodymyr and Olga in Simferopol under the guise of repairs. Now the occupying authorities are trying to destroy the temple in Yevpatoria.

The Russian government’s policy of freedom of religion in occupied Crimea is discriminatory and intolerant to almost all religious denominations except the Russian Orthodox Church and the Ukrainian Orthodox Church of the Moscow Patriarchate. All other religious organizations are constantly confronted with violations of religious rights through Russian law aimed at significantly restricting religious freedom, moreover Muslims and supporters of the Jehovah’s Witnesses are being persecuted and imprisoned solely because of their religious beliefs.

By obstructing the activities of the OCU and other “undesirable” denominations in the occupied Crimea, the Russian Federation violates international obligations to ensure freedom of religion and non-discrimination (in particular, Articles 9 and 14 of the European Convention on Human Rights; Articles 18, 19, and the International Covenant on Civil and political rights, as well as the provisions of the UN Declaration on the Elimination of All Forms of Intolerance and of Discrimination Based on Religion or Belief, 1981). The Russian Federation also violates the IV Geneva Convention 1949 (Article 58), which obliges the occupying power to permit ministers of religion to give spiritual assistance to the members of their religious communities.

According to this, we demand from the Russian Federation and the occupying authorities of Crimea:

We call on international organizations and foreign governments to:

We call on the Government of Ukraine:

Review on the human rights situation in Crimea in August 2020

In the center of Kerch, despite the pandemic, the service in the Russian army is being promoted (photo)

Militaristic mass events are held in Sevastopol during a pandemic