In 2017 the ‘courts’ in the Russia-occupied Crimea will impose a new kind of punishment – rehabilitation through work. This information has been published at the Simferopol Court website. 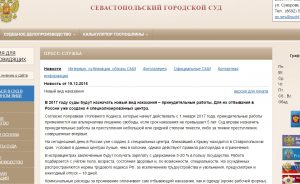 ‘According to the amendments to the Criminal Code of the Russian Federation to come in force since 1 January 2017, rehabilitation through work shall be applied as alternative to deprivation of liberty if the punishment period does not exceed 5 years. The court may impose the rehabilitation through work for crimes of minor or middle gravity or for heavy crimes carried out for the first time’, the statement says.

Crimea has no establishments dedicated for serving a criminal sentence in the rehabilitation through work. So, pursuant to the Russian laws valid de facto on the peninsula, Crimeans will be transferred to the Stavropol Territory, the closest to Crimea.

‘Nowadays four special centers have been established in Russia, with one in the Stavropol Territory being the closest to the Crimea’, the Sevastopol Court website states.

Experts of the Crimean Human Rights Group attract attention to the fact that displacement of the Crimea residents to serve the sentence as rehabilitation through work beyond the peninsula limits shall constitute a major breach of Article 49 Part 1 of the Geneva Convention Relative to the Protection of Civilian Persons in Time of War of 12 August 1949.

Pursuant to Article 49 Part 1 of the Geneva Convention Relative to the Protection of Civilian Persons in Time of War of 12 August 1949, any transfer as well as deportations of protected persons from occupied territory to the territory of the Occupying Power or to that of any other country, occupied or not, are prohibited, regardless of their motive. This means that the Russian powers have no right to transfer the Crimean residents against their will to the territory of Russia.