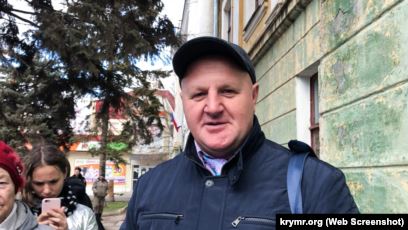 On March 5, 2020, the Dzhankoy District Court found Mr Sergey Filatov guilty of creating a branch of the Jehovah’s Witnesses religious organization (RF CC Article 282.2-1) and sentenced him unlawfully to 6 years in custody, with the deprivation of the right to be engaged in educational activities, the activity related to speeches and publications in the media, to post materials on the information and telecommunication networks, including the Internet, for a period of 5 years and with a restriction of freedom for 1 year, to serve the main sentence in the general security penal colony.

Mr Filatov was placed under arrest in the court room and transported to the Detention Center. The Crimean had been earlier under the travel restriction order.

The people came to the court building in Dzhankoy to support the believer.

Let’s recall that on February 28th ‘the prosecutor’ asked for 7 year’s sentence for Mr.Filatov.

On November 16, 2018, the homes of alleged (according to investigators) followers of “Jehovah’s Witnesses,” including Sergei Filatov’s one, were searched. The investigation believes that as earler as in October 2017 Mr. Filatov set up the SIVASH unit in Dzhankoy, which is a part of the Jehovah’s Witnesses Management Center. According to the FSB, he held public meetings and speeches promoting the ideas of the religious movement.

Aleksandr Siedov, the Crimean Human Rights Group expert, explains that persecuting the ‘Jehovah’s Witnesses’ just because they are members of religious organization constitutes itself a severe violation of the European Convention on Human Rights, Article 9 (Freedom of thought, conscience and religion).

‘The fact that ‘Jehovah’s Witnesses’ religious organization members are persecuted in the form of depriving of liberty on the occupied territory of Ukraine due to the RF laws, constitutes a violation of some other articles of ECHR and the 4th Geneva Convention. First of all, this is ECHR Article 5 (Right to Liberty and Security). Since the ‘Jehovah’s Witnesses’ are not forbidden in Ukraine, their persecution in Crimea violates ECHR Article 7 (No punishment without law). Enforcement of the Russian Criminal Code on the occupied territory of Ukraine violates Article 64 of the 4th Geneva Convention. Persecution for the religious beliefs on the occupied territory violates Articles 27 and 58 of the 4th Geneva Convention’, the expert says.

Thus, depriving the ‘Jehovah’s Witnesses’ of liberty in Crimea constitutes a package of violations of the human rights and the international humanitarian law, and, consequently, would fall under the jurisdiction of the European Court of Human Rights and the International Criminal Court.

Case of Citizen Journalist Found Non-Guilty To Be Reconsidered

Destruction of House of Rustem Useinov, a Crimean Tatar Movement Veteran is a War Crime – Lawyer

Discrimination of Crimean Tatars and Freedom of Peaceful Assembly