Today is June 26, International Day for the Support of Torture Victims. On this day in 1987, the Convention against Torture and Other Cruel, Inhuman or Degrading Treatment or Punishment was adopted. To date, the Convention has been ratified by 162 countries. On this day, we want to recall a severe issue of impunity for the Russian security forces for torture in the occupied Crimea.

The Crimean Human Rights Group reviewed the sentences published on the websites of Crimean “courts” and passed under articles on torture and abuse of power.

An essential difference between the Russian criminal code and the Ukrainian one is that there is no article imposing a punishment specifically for the torture.

The practice of punishment for torture in the Russian Federation extended to the occupied territory of Ukraine, is based on applying the RF Criminal Code Articles 117-2 (Tormenting with torture), 286-3 (Abuse of power with using or threatening to use the violence) or 302-2 (Coercion to testify using torture).

The note to RF CC Art. 117 states that ‘torture’ means the infliction of physical or moral suffering in order to compel to testify or to take other actions contrary to the will of a person as well as to punish or for other purposes. The RF CC Article 286 does not mention the idea of “torture”. The RF CC Article 302-2 directly indicates the offense as “coercion to testify, combined with the use of violence or torture”.

The CHRG experts reviewed the sentences published on the websites of the “courts” in Crimea under these articles.

Only Part 3 of the RF CC Article 286 is applied against the authorities for using or threatening to use the violence. In total, at least 95 cases were sent to the Crimean ‘courts’ under the RF CC Article 286-3 for the period of occupation, with 64 verdicts on these cases published on the ‘court’ website.

On the websites of the “courts” of Crimea there is no information on considering cases against the RF FSB men. At the same time, the overwhelming majority of statements of torture within the politically motivated persecution refer to the RF FSB men as guilty. For example, Alexander Kostenko, Yevgeniy Panov, Vladimir Prisich and other persons involved in politically motivated criminal cases were tortured by the FSB after the arrest. This as well as the fact that all the cases the CHRG knows about against FSB officers were closed due to the “lack of corpus delicti,” proves the actual “immunity” of the RF FSB staff for torture. 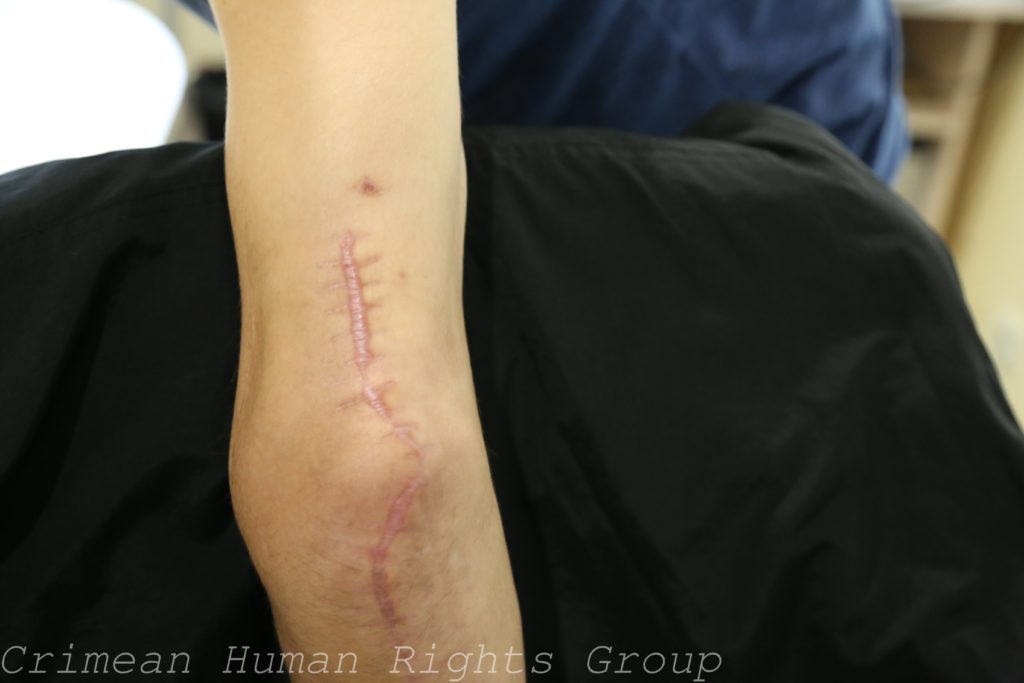 Photo of the arm of political ex-prisoner Aleksandr Kostenko broken during the torture, after the surgery. Torture caused irrecoverable injuries that resulted into disability.

Monitoring of applying the RF CC Article 302 in Crimea shows that there is not any court decision under this article though the description of the facts of torture (both collected by the CHRG and described in the sentences under the RF CC Article 286) contains the necessary elements of a crime under the RF CC article 302. This indicates the prevailing practice when using violence by representatives of law enforcement agencies is considered as abuse of authority, but not as the use of torture.

The practice of applying RF CC Articles 117 and 286 indicates that the RF CC Article 117 is used to punish torture or violence committed by persons who are not the authorities. If torture is referred to the RF law enforcement agencies men, then this is considered only as “abuse of authority”. In other words, “a representative of the authorities cannot torture, he can only exceed his authority”.

The review of information collected by the CHRG on the sentences under RF CC Articles 117 and 286 shows that “judges” and “investigative bodies” do not pass sentences related to real deprivation of liberty against RF law enforcement agencies men, and the sentences passed decide to use the minimum sentences as punishment or less than the minimum. The only decision on real deprivation of liberty was made in relation to a police officer who beat another officer. As to the RF FSB men, not a single criminal case was found on the websites of Crimean “courts”.

The results of monitoring and review confirm that after the occupation of Crimea by Russia, the use of torture by the RF FSB and the police against Ukraine nationals has become not only consistent, but also unpunished. Crimeans are also deprived of the right to legal protection in the event of torture, since statements of torture are not investigated in Crimea, and the courts practically do not consider cases of torture of civilians by the RF law enforcement agencies men. Even in cases of sentencing for the use of violence, minimal punishments are applied (fines and suspended prison sentences).