Crimean children have been affected by the ambitious Russian aggressive military propaganda for six years already. Some of such actions may be determined as military crime and violate the rights of children. This is described by Ms Irina Siedova, Crimean Human Rights Group expert, for the article in ‘DZERKALO TYZHNIA’.

Ms Olha Skrypnyk, the Crimean Human Rights Group Head, is explaining what international norms are particularly violated by the RF in this case:

‘Geneva Convention relative to the protection of civilian persons in time of war of 12 august 1949, Article 51, states that no pressure or propaganda which aims at securing voluntary enlistment in the occupying power armed forces is permitted. Moreover, many children when they have aged 18 are drafted to the Russian Army. So, we have all grounds to consider this a military crime of Russia. 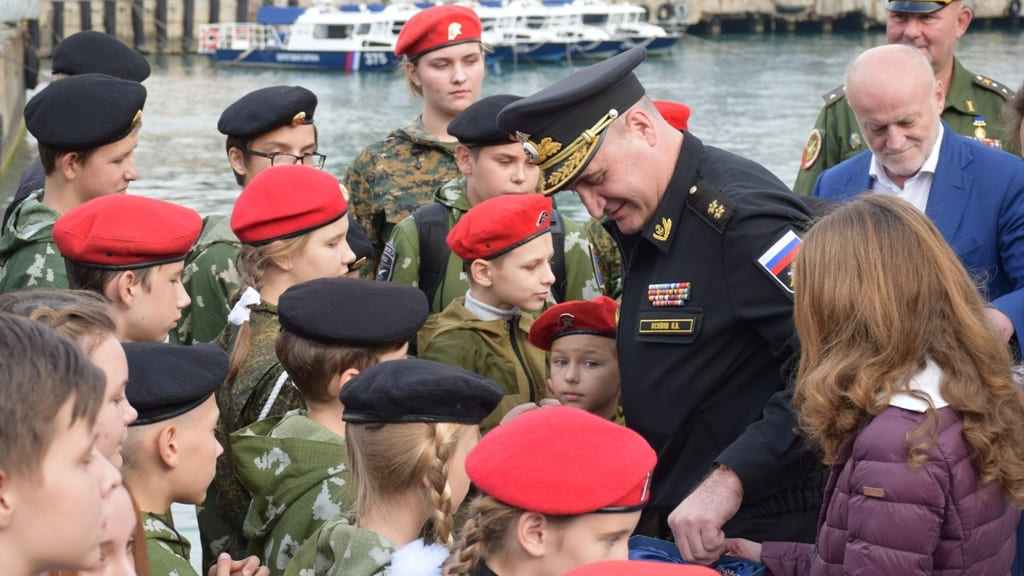 Convention on the rights of the child, Article 38 (ratified by Russia on 23 August 1993) commits the occupying power to respect and to ensure respect for rules of international humanitarian law applicable to it in armed conflicts.

In fact, the RF authorities have been disrespecting these rules grossly and consistently for all these six years. The entire school education system, starting from education programs, propagandize, in this or that way, the service in the Russian armed forces and ‘Russian world values’ that deprive the children of the opportunity to demonstrate the Ukrainian identity or to choose a personal identity freely. Thus, this refers to preserving and developing a child’s identity as highlighted in the Convention on the Rights of the Child’, the human rights activist said.

This strategy is also enshrined in the edicts of the occupying authorities of Crimea.

One of the objectives of the Concept is to develop the Russian civil identity principles in Crimean children. Another objective is “to improve the military-patriotic education and to enhance motivation for military service, to provide citizens of the Republic of Crimea with basic knowledge in the field of defense and to teach the basics of military service”.

The ministries, departments, NGOs and the media controlled by the Russian authorities have been successfully implementing these tasks in Crimea for five years already.

“The UN Convention states that a child should be brought up in an atmosphere of peace, tolerance and friendship between all peoples, ethnic, national and religious groups. However, a completely different atmosphere is created for children in Crimea,” explains Olha Skrypnyk.

“This is a policy of depersonalization of the individual and preparation of young people for the unlawful, pursuant to the international humanitarian law rules, draft in the army of the occupying power. The enemy, according to Russian curricula and educational events, is usually either Ukraine or Western countries, while the Ukrainian state is considered in textbooks as supposedly part of “Great Russia,” she said.

Chasing for Consciousness of Children

The issue of changing the national identity of the Ukrainian children in Crimea is not only of legal, but also of psychological nature. The occupying authorities are affecting the children conscience with their actions. 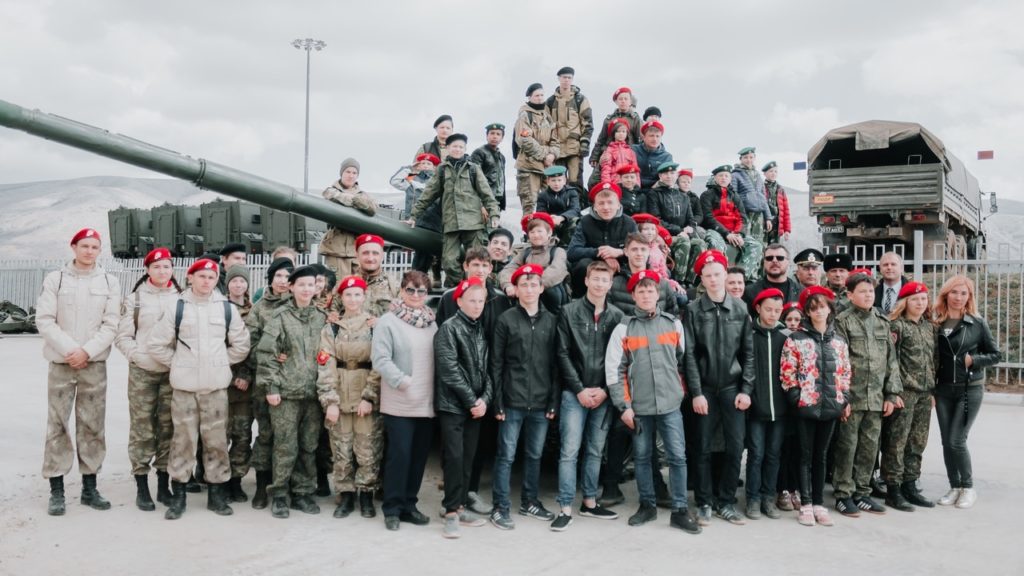 Ms. Julia Krylova-Grek, a psycholinguist, and a PhD (psychological sciences) believes that children who have become victims of such propaganda have almost no choice.

“On the one hand, there are parents supporting everything that happens, and on the other, a school with compulsive lopsided education. The situation is especially dramatic when it comes to orphanages. If in the first case there is at least hope for non-nonsense adults, then here no alternative exists. In principle, children simply do not see the other side of the coin, they have nothing to compare life in the occupied territory with. Willy-nilly, they become part of this world, that ultimately changes their consciousness and forms an attitude towards life,” says the scientist.

One example of such work with orphans is the launch of the ‘Unarmia[1]. Mentoring’ Program in Crimea. This project is designed for pupils of boarding schools that the Unarmia leaders are working with, involving them on a large scale in the militarized way of life.

Ms. Krylova-Greek is sure that for orphans participating in the program, the chances of getting an alternative view of the world are brought to nought.

“In the case of orphans who lack a family, where they could feel support and share their experiences, the mentoring system from the state can become an additional lever of influence on the unformed mind. And if a person who comes to children as a mentor is a teacher talented enough to win over a child and become an authority for him, then his/her opinion will be of great importance, that makes children a priori led. ”

An important contribution into the personality evolution is also made by television. The American Academy of Pediatrics (AAP) has experimentally proved that television does not just influence, it shapes children’s behavior and their attitude to life.

The situation with freedom of speech in Crimea does not contribute to the development of critical thinking of small Crimeans. As monitorings of the Crimean Human Rights Group show, Ukrainian websites, radio stations and some satellite television channels are constantly blocked on the peninsula.

Under these conditions, the mind is subject to a mass scale attack, and certain stereotypes are created in Crimea, the psycholinguist believes.

“Parents, school, kindergarten, movies – everything is aimed at creating a certain attitude, a certain type of behavior and a picture of the world. And, of course, then it will be very difficult to teach these people to think critically, to see alternatives. Just as many grandfathers and grandmothers still miss Stalin and the USSR, so perhaps some percent of these children will still have nostalgia associated with the great militant Russia.

The reasons for nostalgia are very simple and understandable: childhood memories, mostly positive, create a picture of memories unified with the environment. In kindergartens, schools, the idea of the “Russian world” superiority is built up through the game, that is the best form of perceiving the information and that will be associated with positive experiences associated clearly with the militant-patriotic semi-Soviet world. Therefore, there is a very high probability that this world will become the place where these people will get used to feel good and comfortable,” Ms. Krylova-Grek says. 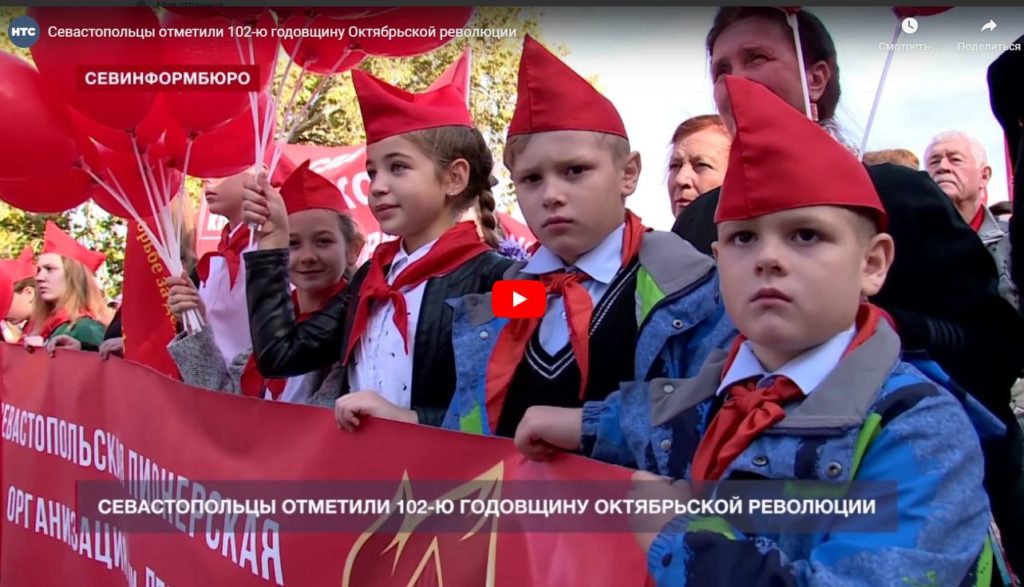 In terms of psychology, a child is more trusting than an adult, it has less experience,” the scientist explains.

“A child until early teens has no abstract concepts formed yet. Its psyche is much more flexible, its consciousness is much easier to manipulate and control. And this is one of the reasons why a child under 15 should not be involved in any paramilitary organization. Unfortunately, all these bad things are done with the consent of the parents. In a situation where the parents’ opinion is opposite to Russian propaganda and they somehow explain it to the children, the child is much less likely to become a small militarized cog of a large imperial mechanism. In a situation where parents are part of this world, their children have very little chance of breaking out of this information and propaganda circle,” Ms. Krylova-Grek explains.

Another way to influence the fragile minds of Crimean children is to involve priests in the identity changing process. For example, cadets of Kazak classes in Crimea take an oath, with the Russian Orthodox Church priests participating in the ceremony. 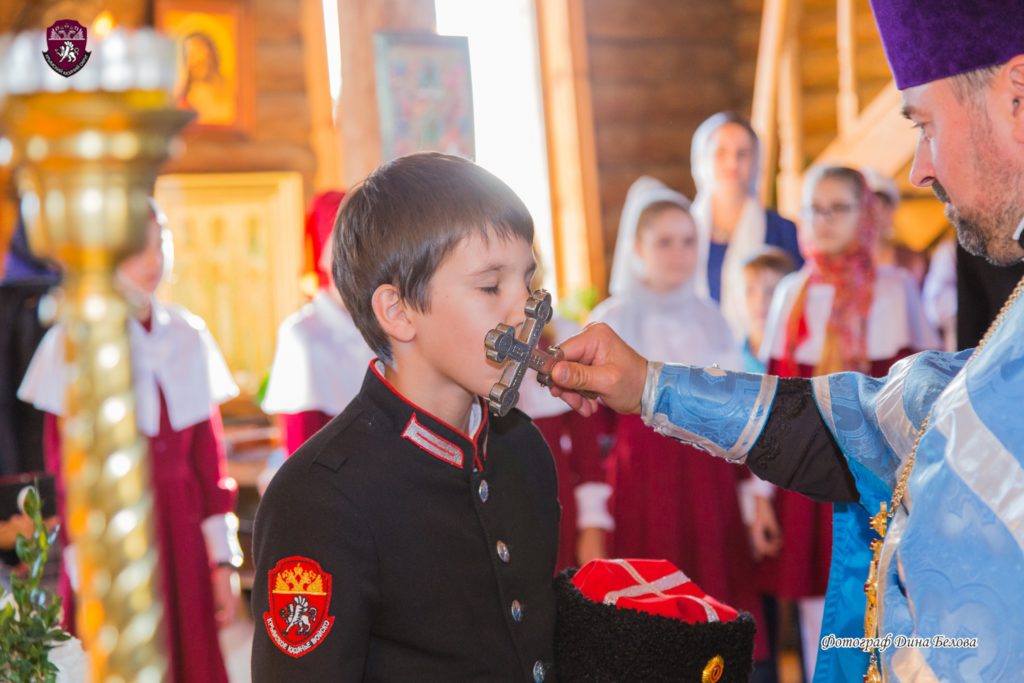 Moreover, the wording of the Kazak oath for Simferopol High School no 10 pupils includes the words of the oath of allegiance to Russia. In the minds of these children, their religion and Russian identity are, thus, merged together. 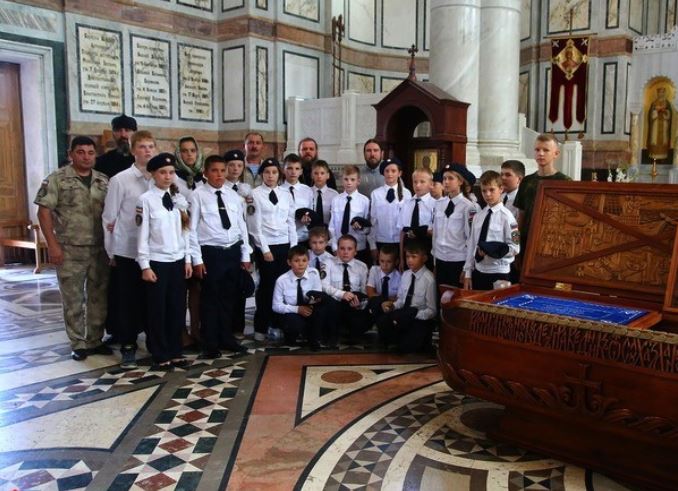 “If a child comes from a religious family, then it is also about authority, only in the religious world. And if the child has been told, for example, that Russian Admiral Ushakov is a saint, then the child will have no reason to doubt it,” the scientist says.

At the same time, Julia Krylova-Grek believes that if there is be too much propaganda and the difference between what is said and what is real become visible, then satiation with false information comes and doubts appear. As a result, children who have matured will see this difference and, coming into a state of cognitive dissonance, will try to figure out the situation themselves and look for alternative sources of information.

Today, the Internet, which is still difficult to control, remains such a source for children.

The collection of facts and evidence of violations is a very important and necessary work, that b human rights organizations and law enforcement agencies of Ukraine are dealing with.

“The Crimean Human Rights Group, together with the ARC prosecutor’s office, is preparing a report to the International Criminal Court (ICC). Documented facts of violations of international humanitarian law rules related to propaganda of the RF military service among children will be submitted to the ICC OTP. In addition, we are preparing information for the relevant UN institutions on violations of children’s rights as a result of the public life militarization on the peninsula, ”says Ms.Skrypnyk

It is important to formulate the basics of media literacy in children. To keep track of what content the children watch, read and listen to.

“Unfortunately, at present, even some adults are not able to evaluate information adequately. There is also a psychological moment. People have such a feature that if they have already got some beliefs, they try to find information that confirms these beliefs. And therefore, perhaps they will not even want to read or take seriously what is not in line with their beliefs. For instance, the American Academy of Pediatrics considers improving the media literacy of the parents as one of the efficient ways to protect the children against the TV impact.

If we talk about what Ukraine can do to correct the situation, then here we need to think about forms of presenting information to children in Crimea. For example, it can be an Internet channel with a video about life in developed countries or life stories, including with residents of Ukraine, cartoons, where the features of Ukrainian culture, historical reviews are colorfully shown. The information should be in a cognitive or game form, because the news format for children will not be very interesting,” the scientist recommends.