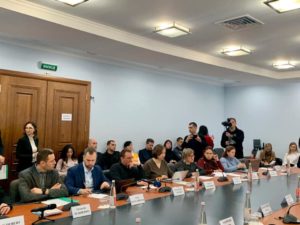 The extended meeting of the Verkhovna Rada Human Rights Committee was held in Kherson, attended by Ms. Olga Skrypnyk, Chairman of the Crimean Human Rights Group Board, and Mr.Alexander Siedov, a CHRG analyst.

The adoption of the Law of Ukraine “On establishing the CRIMEAN free economic zone and peculiarities of economic activities on the temporarily occupied territory of Ukraine” has caused a substantial and unreasonable restriction of constitutional rights and freedoms for both Crimeans and people crossing the checkpoints (Entry / Departure checkpoints for Crimea).

“In fact, pursuant to the law, since 2014 the customs monitoring has been established at the checkpoints, that contradicts other laws of Ukraine. So, the right of Crimeans to evacuate free their personal movable property from the temporarily occupied territory is restricted because the customs officers at the checkpoints refer to Article 374-1 of the Customs Code of Ukraine stipulating that the goods of total value exceeding the equivalent of EUR500 and of total weight exceeding 50 kg, that are imported by citizens to the customs territory of Ukraine in hand luggage and / or in the accompanied baggage shall be subject to customs fees, and to Article 370 regarding the list pf goods that may be considered personal belongings of the citizens. This constitutes a reason for rejecting the Crimeans to move such property as musical instruments, furniture, personal objects of art, plants, large size household appliances, etc.) through the checkpoints from Crimea. The procedure of such rejection is not transparent and provokes corruption risks, the human right expert reported. 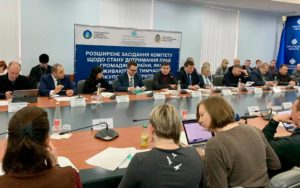 Olga Skrypnyk noted that this law had introduced a model according to which Ukrainian nationals registered in Crimea were recognized as “non-residents”, and their capacities to use banking services were significantly limited. In addition, this status of “non-residents” subject such citizens to restrictions in receiving pension and social benefits, notarial services.