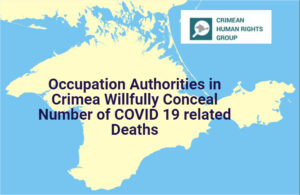 The independent sources in the occupied Crimea in October informed the Crimean Human Rights Group about an unofficial order to conceal the actual number of people whose death was caused by the coronavirus infection on the peninsula.

The first source is an employee of one of the Crimean morgues. According to him, one or two people who died from COVID-19 are daily brought to the morgue, though another reason for the death is indicated in the documents.

The information that the official statistics of deaths from coronavirus infection is underestimated has been also confirmed by a medical technician of one of the hospitals in another city. According to his words, the number of deaths is constantly increasing , but the death reason indicated in he documents is usually one of the accompanying patient’s diseases, without any COVID-19 reference.

In addition, the Crimean Human Rights Group has collected the data verifying a deliberate understatement of the public COVID 19  death rate statistics by the occupation authorities.

The Crimean ‘authorities have started’ reporting the dead due to coronavirus only since April 30.

But on July 8 Mr. Igor Chemodanov, head of the “MoH” of Crimea, informed on changing the coronavirus death recording system.

Since then, other statistics with significantly reduced COVID-19 caused mortality rates began to appear on the official sites of the Crimea “authorities”. Using this manipulation, the number of deaths was reduced by 19 people only in the officially published statistics.

Given the new information about the non-public order to conceal the real number of deaths, one can say that the occupation authorities intend to further underestimate the mortality statistics.

The understated COVID-19 caused mortality statistics is just one of examples how the Russian Federation does not comply with its international obligations to protect the civilian population from the pandemic, not ensuring the required activities of medical and sanitary institutions on the peninsula. The Russian Federation ought to take preventive and pro-active measures necessary to combat the spread of COVID-19, but instead it conceals the real statistics of morbidity and mortality from the population and international organizations, holds mass events without observing personal protective measures in order to militarize the civilian population, including the children, disrespects the WHO and Council of Europe recommendations on protecting the people in the places of unfreedom, etc.

The full wording may be found here.