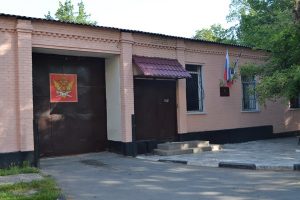 The Crimean human rights group became aware of new facts of inhuman and degrading treatment of people in the Crimean pre-detention centre.

Lawyer Aleksei Ladin, who is currently defending journalist from Alushta Aleksey Nazimov, who is a member of the Human Rights Contact Group of Emir-Usain Kuku and other Crimean political prisoners, told about the conditions of detention of his clients.

According to Ladin, the Crimean prisoners are being kept in narrow small rooms, where you can only stand or sit before the court sessions for several hours.

“Before sending prisoners to the court, if they are taken out of pre-detention centre, they are putted in a so-called “glass” for 6-7 hours. This is a narrow chamber where you can only sit, you cannot lie there, and there are several people waiting for the prison trucks. Before their departure they are knocked to their prison cells at 12 at night to let them know they are supposed to be ready to leave in the morning, “- Alexei Ladin told the Crimean human rights group.

“The system works such way that they don’t take one person at the time and transfer to a prison truck, but put people first in the “glass” where they can be for 2 or 3 hours before they are all putted into the prison trucks. In these rooms it is very crowded and stuffy. Prison trucks are too stuffy. All this is very exhausting, and they still needs to be on trial, in a more or less sane state, “- explained Ladin.

Also, the lawyer reported that if a person is in the court during the day, he remains hungry, since no dry rations are provided, and hearings are sometimes delayed for the whole day. Ladin noted that this way prisoners are forced to starve, which further exacerbates the health problems of prisoners.

The defender confirmed the information previously published by the CHRG that the cells in the Simferopol jail are overcrowded, people are sleeping there in turn – day, evening, night. The food that is given in the pre-detention centres is not edible and the water is not suitable for drinking.

“They are very badly fed in the pre-trial detention centre. Who has the opportunity, try not to eat at all what they give; they eat the food that is given by the relatives. According to my client, Emir-Usain Kuku, even boiled water stinks strongly, it is absolutely not drinkable. Accordingly, the food is cooked on the same water. Kuku said that he had signs of urolithiasis, “- said the defender.

All statements about the medical care of Ukrainian political prisoners in Simferopol detention centres are being ignored. “According to the regulations, the doctor must come within 24 hours after the application. In fact – if a week after writing the statements the doctor calls to see himself – it’s good. But instead of the doctor usually a paramedic or nurse comes in and says frankly: “I understand that you have this kind of disease, but I have no medicine.” Anecdotal situation, when one tablet breaks in half, and one part is given from the headache, the other from the stomach pain – this corresponds to reality, both in the Simferopol and practically in every pre-detention centre in RF, maybe excluding Lefortovo,” – Ladin said.

“Medicines can be brought by relatives, but this also has it’s difficulties, since to transfer the medicine to the prisoners from relatives it is necessary for a doctor to come to the prisoner, make a diagnosis, confirm that medications are necessary, and allow transition of medication,” –  explained the lawyer. 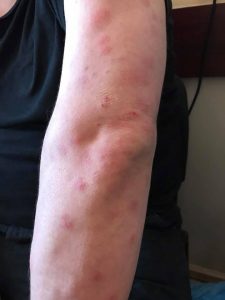 The lawyer of Evgeny Panov, accused by the de facto Crimean authorities in organizing sabotage on the peninsula, Dmitri Dinze, reported that his client is suffering from stings of bugs in the cell of the pre-detention centre. According to the lawyer, along with Panov there are 21 more people in cell number 102. Dinze published a photo in Facebook showing wounds on Panova’s hand from insect bites. Olga Dinze, defender of Ukrainian prisoner stated that they applied to the Federal Penitentiary Service of Russia on this matter. “Additionally, I want to inform you that Yevgeny Panov was placed in this cell by the initiative of the officers of the FSS who are carrying out operational support in the criminal case with a view of psychological pressure on him,” – the lawyer said.

Earlier, the CHRG reported on the deterioration of health of people in jail, as confirmed by Crimean lawyers and relatives of other political prisoners. CHRG recorded complaints about the failure to provide medical assistance to Vladimir Balukh, Arsen Dzepparov, Vladimir Dudka, Evgeny Panov, a citizen of Ukraine and Afghan origin Kabir Mohammad, Vladimir Prisich and others. Such actions by the Russian authorities against Ukrainian political prisoners are an additional way of pressure on them. Thus, the occupation authorities are trying to force people to agree with the accusation and to suppress people from showing of their civil position that is different from the Kremlin.