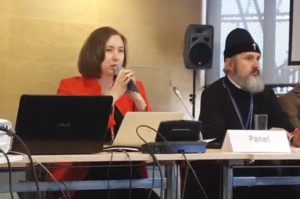 Ms Olga Skrypnik, the head of the Crimean Human Rights Group, took part on September 25th, 2019, in a panel discussion organized with the support of the missions of the USA, Ukraine, Canada, Denmark, Estonia, Georgia, Ireland, Latvia, Lithuania, Poland and Sweden within the OSCE meeting on the human dimension in Warsaw .

“The Russian Federation has closed Crimea in terms of information for international missions in order to conceal its war crimes. Despite the difficult situation with access to the occupied peninsula, the Crimean Human Rights Group keeps on monitoring of the observance of human rights in Crimea. The results of documenting human rights violations are used, for example, as part of the evidence base for the UN International Court of Justice, the International Criminal Court (Office of the Prosecutor), the European Court of Human Rights, ”said the human rights expert.

Ms Skrypnik thanked the UN Monitoring Mission in Ukraine for important work. Despite the fact that Russia does not allow working directly in Crimea, the Mission remotely monitors compliance with human rights, collects, together Ukrainian human rights defenders, information about the situation on the peninsula, talks with victims and witnesses of human rights violations.

The human rights expert also noted that the Russian Federation continues to conduct unlawful conscription into its Armed Forces in Crimea, and according to the Crimean Human Rights Group data, almost 19 thousand Crimeans have been unlawfully drafted into the army of the occupying power.

The CHRG head told about tortures and ill-treatment of Ukrainian nationals in places of detention in Crimea and Russia, that was reported by the victims and their lawyers.

Ms Skrypnik pointed out that according to the official information of the RF Federal Penitentiary Service published in the summer of 2018, 25 deaths had been recorded in the Simferopol Detention Center since 2014, of which, according to the Federal Penitentiary Service report, 8 deaths occurred as a result of suicide, and 17 people died “due to natural deaths”. 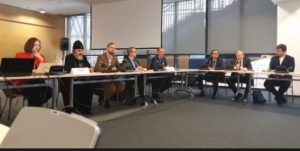 “However, no independent investigation of these deaths has been conducted, and there is no access for human rights organizations or international organizations to places of unfreedom in Crimea. Thus, the causes of these deaths remain unknown. This issue requires finding opportunities for an independent monitoring of places of unfreedom in Crimea and a constant monitoring of prisoners’ health condition in such places both in Crimea and in the Russian colonies where Ukrainian nationals are kept, ”said the human rights expert.

Ms Olga Skrypnik called on the OSCE, within the framework of international monitoring of human rights in the Crimea, the ODIHR and the HCNM to verify Russia’s compliance with the OSCE recommendations regarding the situation in the occupied peninsula.

“The joint mission of the OSCE Office for Democratic Institutions and Human Rights and the High Commissioner on National Minorities to assess the status of human rights in Crimea in 2015 published its report with recommendations. The Russian Federation has not achieved any them. This gives the Mission grounds to update its report and examine the status of implementing these recommendations,” the human rights expert summed up.

Ms Olga Skrypnik demanded also Russia to ensure an access to Crimea for JMM of OSCE and UN Monitoring Mission that have a mandate for working in Ukraine.

Mr Anton Korinevich, Permanent Representatives of President of Ukraine to the AR of Crimea

Mr James S. Gilmore, US ambassador to the OSCE

Several UNGA resolutions No. 71/205, 72/251 and 73/263 on the human rights situation in the Autonomous Republic of Crimea and the city of Sevastopol (Ukraine) call for independent monitoring. Independent international observers have not had any access to the peninsula since 2015, when the OSCE Office for Democratic Institutions and Human Rights (ODIHR) and the High Commissioner on National Minorities (HCNM) organized a joint human rights assessment mission. The OSCE Special Monitoring Mission in Ukraine (SMM) is authorized to monitor in Crimea – however, the occupation authorities have refused to support this. In absence direct access, the UN Human Rights Office and non-governmental organizations are monitoring the situation remotely. The actual scale of the issue is unknown, since independent international observers cannot gain access to this zone, while Russia has imposed an information blockade in Crimea.