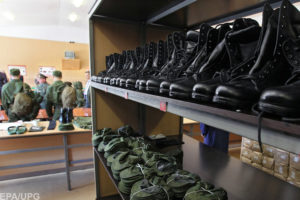 About 2,800 residents of the occupied Crimea will be sent to serve in the RF Armed Forces upon the 2019 Spring draft campaign results.

This was said by Mr Roman Bykov, a representative of the Russian Military Commissariat in Crimea, at the press-conference in Simferopol. According to his words, the Crimean draftees will be sent to serve in the Air Space and Land Forces as well as in the Navy.

‘About 400 men will serve on the territory of the Republic of Crimea’, Mr Bykov said.

According to the information of Mr Oleg Yermilov. a ‘military commissar’ for Crimea, 13,500 men had been called up for military service in the Russian Army from Crimea since 2015.

At the same press-conference the occupying authorities presented an information diagram on the number of the Crimeans drafted to the RF Army for 2015 – 2018, excluding the draftees from Sevastopol City.

As reported by Mr Yermilov, since 2015 in Crimea about 300 peninsula residents had tried to evade the military service. He stated that 15 criminal and about 250 administrative cases had been opened on the facts of ‘evasion of military service’ for this period.

According to the information of Crimean Human Rights Group (CHRG) experts, at least 53 criminal cases have been opened in Crimea for evading the service in the RF Armed Forces, with 51 convicted already. Most sentences passed on the Crimeans are fines of RUR5,000 to 80,000. However, the fine paid does not relieve the person from serving in the armed forces. At least one sentence is an 8-month’s probation.

These sentences testify that the Crimean residents are forced to serve in the Occupying power’s army. It is worth noting that with each next conscription the number of sentences for evading the service in the RF armed forces grows up.

The CHRG would like to remind that drafting the Crimeans to the RF army is a severe violation of the international humanitarian law norms.

The Crimeans who do not want to serve in the RFD army as well as to be sentenced for evasion have several ways to act. Ukrainian and Russian human rights experts have developed recommendation for the Crimeans how not to be criminally prosecuted for the RF army military service evasion.

The CHRG is asking the Crimean residents to email files confirming the military conscription in Crimea to [email protected]  (draft notices, photo and video files).