Главная → News → In the Crimean “court” in the case of the Ukrainian “saboteur” Panov, his mother Vera Kotelianets was questioned 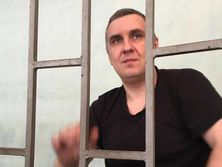 At a meeting of the “Supreme Court” of Crimea on the “case of the Ukrainian saboteur” Yevgenii Panov on June 13, 2018, “judge” Andrei Paliy interrogated as a witness the mother of Panov Vera Kotelianets. She told the “court” that her son Yevgenii Panov does not hate Russia’s citizens.

At the last meeting, despite the objections of the defence, “confessions” were read out, which Panov gave in the presence of the lawyer after applying torture to him, but later refused them. At the request of the defence, today during the meeting they read out the testimony of the Ukrainian, which he gave after independent lawyers entered into the case on the contract.