Главная → News → How to Protect Children in Crimea Militarized by Russia 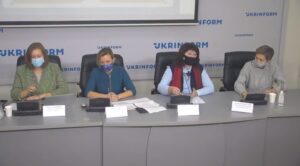 What should Ukraine do to save children in the occupied territories from the conscience militarization  Russia has been effecting for the last six years? Answers to these questions were made public by scholars and human rights experts during the press conference in Kyiv on November 25.

“Paramilitary measures promoting the service in the Russian army were carried out in Crimea, ignoring the rules of protection against the pandemic. They were attended by a lot of children, and their health was put at additional risk, that could have been definitely avoided. Such actions are mixed with constant impunity for online hostility incitement regarding Ukrainians and Crimean Tatars. At the same time, children are deprived of access to the Ukrainian television, blocking the websites of leading Ukrainian TV channels on the Internet. The opportunity to receive education in Ukrainian on the peninsula is also almost blocked. All this violates the Convention on the Rights of the Child, which Russia has ratified and shall comply with. “

Evidence of violating the children’s rights related to the conscience militarization was submitted by the Crimean Human Rights Group representatives to the UN Committee on the Rights of the Child.

Ms Olha Skrypnyk, Crimean Human Rights Group Head, believes that Ukraine should make every effort to protect the rights of Ukrainian children who remain in the occupation. A group of experts has developed a list of recommendations for the Ukrainian authorities, proposed to be implemented right now, not waiting for de-occupation.

“We are investigating the problem of militarization in the humanitarian dimension, namely how it affects the lives of people in the occupation and the state of human rights respect. I am convinced that action must be taken now to protect Crimean children from the effects of Russian militarization. Our proposals are comprehensive, and refer to various spheres of governmental policy, with all governmental agencies to be involved. Thus, there are recommendations for the Parliament, the Ministry of Defence, the Ministry of Education and Science, the MFA, and others,’ – Ms Skrypnyk explained.

Ms Yulia Krylova-Hrek, PhD in psychology, is sure that first of all, the development of critical thinking of the children and the youth should be addressed.

“One of the effective ways to work with the younger generation is to implement programs for the development of critical thinking, such as media literacy and cyber literacy, to be presented in an interest generating format: games, quests, etc. We need to show children how important it is to check the information so as not to be “bought” by everything that is imposed in the Crimean and Russian media space, to be immune to the manipulative concept of “Friend or Foe; Black or White’ often used in Crimea by Russian media’, the psycholinguist thinks.

Ms Valentyna Potapova, ALMENDA Center for Civic Education Head,  is confident that in the context of present-day challenges, namely the armed conflict and the occupation, it is paramount to re-realize the approaches to methods of legal regulation, and ensuring the right to education for the occupied Crimea residents.

‘Once the occupation started, the Russian “educational machine” began to apply all methods of ideological propaganda and “janissary” generation formation to Crimean schoolchildren. That is why the question arises: what is the experience and the values ​​the citizens of Ukraine, and – what is the most terrifying – their children learn in the occupied territory. Analyzing the current state of education for Crimea, we can identify at least two tasks for the state. First, the possibility of influencing the worldview of citizens who have remained in the occupied territory and the children who may obtain citizenship at the place of birth. Secondly, the opportunity to have access to the state-guaranteed right to education. Unfortunately, the lack of a strategy for the return of Crimea causes the situation when all actions of the state are case-based and do not create a real mechanism to respond to the challenges. So it begs a rather clear question, whether the Ukrainian state can distance itself from any possibility of influencing the situation?’ Ms Valentyna Potapova raised the issue. 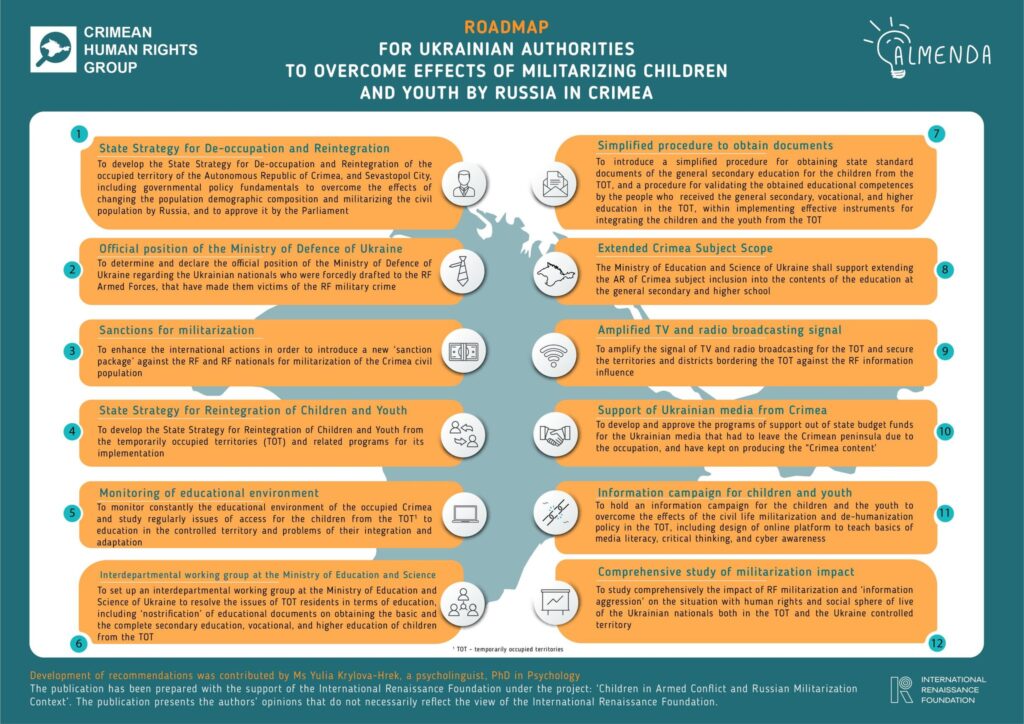 Ms Olha Skrypnyk also added that the full list of recommendations would be submitted to the Government of Ukraine the next days. The text of the recommendations is available on the websites of the Crimean Human Rights Group in the “Analytics” folder and the “Almenda” Center for Civic Education.

The event was organized with the support of the International Renaissance Foundation within the framework of the project ‘Children in Armed Conflict and Russian Militarization Context’. The participants’ speeches reflect the position of the authors and does not necessarily coincide with the position of the International Renaissance Foundation.