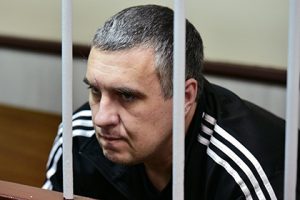 Panov is accused of the fact that he, according to investigators, planned sabotage at civilian and military facilities in Crimea. The list of places where he allegedly intended to carry out sabotage includes the water supply enterprise Pobednoie, the Russian military unit No. 46453, the Feodosia department of Chernomorneftegaz, the ferries of the “Krym” port (Kerch), the subdivision of the RF Ministry of Defense in Crimea. Also the indictment stated that the “saboteurs” were going to detonate self-propelled anti-aircraft missile and gun complexes “Pantsir S1”.

The indictment says that “Panov E.A. was an active participant in the organized group and has experience in conducting reconnaissance, control of unmanned aerial vehicles, fire training, driving vehicles and land navigation.”

According to the investigation, Panov was responsible for conducting the reconnaissance of the area, as well as for “organizing the route, communication of the participants of the organized group on the territory of the Russian Federation with its leaders who were on the territory of Ukraine, as well as supplying them with ammunition.”

It follows from the indictment that Panov was detained at the entrance to Crimea at 3 am on August 7, 2016, without giving reasons. However, on August 10 the Russian FSB detained the Ukrainian. Later it became known that on August 7-10 Evgenii Panov was cruelly tortured to give testimony necessary for the FSB.

According to the testimony of the prosecution witness – “representative of the public” Atik P-I.A, -Panov’s car was allegedly not inspected due to the dark time of day and the lack of proper conditions for this.

Panov’s car was taken to the FSB office in Krasnoperekopsk. Inspection of the machine was made only on August 11. According to the testimony of the prosecution witness – Cynologist Lyashko I.N., the service dog found three electric detonators with wires in a can of machine oil, which was in the trunk of Panov’s car.

Recall that the FSB of the Russian Federation reported only on August 10 through Russian media that a Ukrainian citizen, Evgenii Panov, was detained in Crimea. On the same day, a video appeared on which Evgenii Panov was being handcuffed.

On August 11, several Russian TV channels referring to the FSB of Russia released a video in which Panov gives confessions. There were traces of torture on the face of the Ukrainian. Independent lawyers, who were attracted by relatives of the Ukrainian, were prevented to approach the defendant. Evgenii Panov and the second person involved in the case, Andrei Zakhtei, were taken from Crimea to Moscow. However, lawyers managed to meet with Panov and he told lawyers about the torture applied to him after his detention in Crimea. Later, Evgenii Panov refused from the testimony given under the torture.

According to lawyer Dmitrii Dinze, from the materials of Panov and Zakhtei’s case it is known that on August 8, the Zheleznodorozhnyi court sentenced both to 15 days of administrative arrest under the article 20.1 of the Code of Administrative Offenses (petty crime) for “gross obscene language and insulting adherence to passers-by” committed the same day, on August 8 at 16:30 on Gagarin Street. But Panov and Zakhtei were already detained by the FSB officers for more than a day – this follows from the indictment, since they were “identified and detained” on August 7.