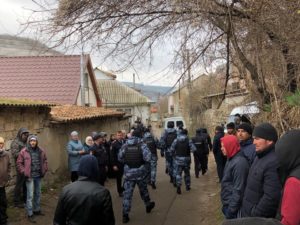 This morning, March 11, 2020, seven houses of Crimean Muslims in Bakhchisarai and the Bakhchisarai district were searched in Crimea.

One of the searches was in the house of Mrs. Zenie Seitmemetova, the 76-year-old living alone mother of ATR TV Channel journalist Seytumer Seytumerov. The Russian security men were looking for her son and the arms in the house. This was reported by Seytumer himself on his social network page. At the end of 2017, he was forced to leave Crimea because of a politically motivated criminal persecution and now lives in Kyiv.

There was also a search in the MTS store, where the detained Amet Suleymanov worked.

After the searches, the Russian security men detained five people.

One of them, 66-year-old Enver Mustafayev, was released after interrogation. FSB officers were looking for his son, Seidamet Mustafayev, a Crimean Solidarity activist, who was not at home at the time of the search.

According to lawyer Nazim Sheikhmambetov, they all are kept in the FSB Department in Simferopol subject to investigation actions.

ATR journalist Seytumer Seytumeroa, who is beyond Crimea, is charged with RF CC Article 205.5-1 for creating a Hizb ut-Tahrir unit.

According to the wife of detained Amet Suleymanov, the security men who had searched their house, had planted 2 new books, neatly wrapped in covers, on the table where the children did school lessons.”

According to the information of local activists, the house of Ayder Sulyemanov was searched though the owners were absent.

According to the information of lawyer Lili Gemedzhi, the data of people who came to the places of search to express their support, were recorded.

‘A lot of people came to the house of Shukri Seytumerov. The traffic police officers blocked the way for drivers and wrote down personal data from driver’s licenses. For instance, my data were recorded. They tried to write down both the address and the telephone. This could be a kind of a new form of pressure on everyone who does not agree with these consistent repressions in Crimea. But this did not stop people, and they continued to come at the site of the search,’ the lawyer said.

Lawyer Edem Semedliayev reported that the special police force men did not allow him to see his client Seytumer Seytumerov during the search.

The Crimean Prosecutor’s Office located in Kyiv, began criminal proceedings on the security of residence violation during unlawful searches in the Bakhchisarai district on the temporarily occupied peninsula.

Appeal Proceedings on Sentence of Artiom Gerasimov, a ‘Jehovah’s Witness’, Started in Crimea