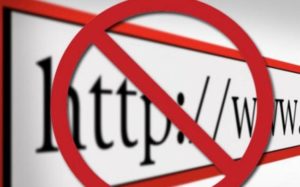 A new RF draft law – no 608767-7 – gives the Russian authorities a free hand to introduce an Internet comprehensive censorship system in Crimea. On February 12th, 2019, the RF State Duma members passed this bill in its first reading.

The bill suggests that an autonomous intra-Russian segment of INTERNET should be created. For this purpose all Russian providers are supposed to be committed to install (at own expense) traffic control hardware in their networks, but RosKomNadzor [Federal Service for Supervision of Communications, Information Technology, and Mass Media] will be in charge of operating it. This hardware, in case of any threat, may re-direct the internet traffic solely on the in-Russian Internet exchange points.

Therefore, the RF authorities will be able to loop the whole internet traffic within their Russian networks, releasing to the global Internet only the traffic seen fit by them. Within this system operations it is supposed also to create a root server autonomous system in Russia that will store copies of Domain Name tables and may be used if the external Internet DNS servers are off. It should be noted that this bill releases the Russian providers from the duty to block/ unblock access to websites by themselves. Now RosKomNadzor will do this with the traffic control hardware.

As the CHRG experts think, these arguments are used to create and legitimate an Internet comprehensive censorship system on the RF territory. After the Crimea occupation, the RF laws are valid de factor on the peninsula territory. If the bill is passed, the Crimeans may be also deprived of a free access to the global network.

With the bill passed and this monitoring system put into operation, the Internet will become accessible only through ‘white lists’ of domains approved by RosKomNadzor. The same way, upon the wish of authorities, the traffic originating from the RF territory and the occupied Crimea may be limited.

According to some technical experts, creating a local internet in the RF is a most complicated and very expensive solution that requires involvement of high end professionals. In my opinion, its implementing is not at all an unlikely scenario as Internet freedom today is one of major threats for Putin’s regime. For instance, information on consistent violations of human rights, military crimes in Crimea causes intensifying the anti-Russian sanctions that affects adversely the Russian economy. Such censorship introduced would allow for shutting down completely an access to the information of journalists and activists coming from the occupied Crimea for the external world. The Russian authorities might also perfectly well use these systems to disorganize the opposition and control overwhelmingly protest movements inside Russia that may also become a threat for the regime,’ Ms Irina Siedova, a Crimean Human Rights Group media expert, thinks.

Mr Aleksandr Zarutsky, a legal expert of the Ukrainian Helsinki Human Rights Union, considers this bill to provoke rather substantial risks for the Crimean residents.

‘A state, surely, has rights to abridge freedom of speech for the sake of national security. But this should not be done on the occupied territories. Any instruments the state may use to interfere in the human rights and freedoms must be reasonable. In this situation I have no grounds to rely on this.

Adopting this law and enforcing it may abridge severely rights of the Crimean residents. Any person whose rights have been violated either directly or due to the law broad language shall be classified a victim. If we consider the situation of overwhelming Internet access restriction including various messengers and communication tools, then this constitutes abridgement not only of freedom of expression, but also right to personal contact. At this point one may consider also violations of Article 8 of the European Convention on Human Rights. In this case a Crimean resident may claim his/her rights at the European Court of Human Rights, though a major challenge the claimant would face would be to verify that the Internet access restriction did occur because of the State and not an individual provider’, Mr. Zarutsky thinks.

Ms Olga Skrypnyk, the Crimean Human Rights Group Head, is sure that it is a high time now to start searching the ways to counteract this RF initiative in order to prevent the Crimea information isolation.

‘The RF restrictions of the Crimean residents’ rights to access to information is a gross violation of international norms. We definitely will inform the international institutions and governments of democratic states on the bill threats. We appeal to the global society to help protect the Crimeans against enforcing the law that may deprive them of the Internet access and possibility to inform on the human rights violations, on the peninsula territory.

Shutting down major channels for Crimeans to communicate with the external world may cause stepping up repressions further and rolling back rights and freedoms in Crimea. Being in the information vacuum, the victims will be deprived of opportunity to request assistance of the international institutions, independent human rights experts and lawyers, while the RF crimes in Crimea would remain untrammeled’, the human rights expert said.

We would remind that on February 13th the RF State Duma passed draft law no 608767-7 ‘On amending certain legal acts of the Russian Federation (in terms of securing a safe and stable Internet network functioning on the Russian Federation territory) in its first reading. 334 MPs voted ‘for’, and 47 did not support this bill.

According to the INTERFAX agency information, almost RUR600mln is assigned in the 2019 budget to set up a Center for Public Communication Network Control under the bill on protecting RuNet against external threats, with over RUR1.8bln to be spent for three years.

The RF communication operators informed the RBC that would hold soon exercises to identify real threats for the Network if the bill was adopted. Then it would become clear how the bill should be amended and how much its implementation would cost.

In 2019 RosKomNadzor has plans to introduce a new technology of fighting with banned websites and services including Telegram. According to the BBC News Russian information, the RF authorities are ready to spend up to RUR20bln for this.