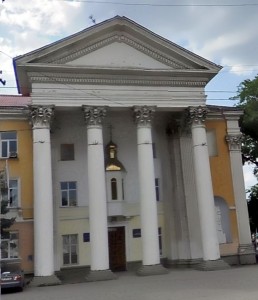 Experts of the Crimean human rights group analyzed the situation with the confiscation of the premises of the Ukrainian Orthodox Church of the Kiev Patriarchate in Crimea.

Last months  the Archbishop of Simferopol and Crimea Ukrainian Orthodox Church Kiev Patriarchate Clement had to  spend almost all his forces in the fihgt to hold the premises in the use of the UOC-KP Church in Simferopol.  Detailed information about the various cases of proceeding and restrictions on the rights of the UOC MP in Crimea posted  in the reviews of Crimean human rights grops, indicating the systemic nature of proceeding of the Ukrainian Church.

One of the forms of proceeding of Kyiv Patriarchate  the Crimea became the confiscation of the premises of the church. Even in 2014, the UOC-KP has lost  at least two churches in the Crimea. The last two years the church has been fighting for the main building – the Cathedral of St. Vladimir and Olga, as well as for other areas of the UOC-KP, located in Simferopol, st. Sevastopolskaya,17. These premises were transferred to the Crimean UOC-KP by the resolution of the Verkhovna Rada of the Autonomous Republic of Crimea  Diocesan Office still May 16, 2001. Premises with total area of ​​1475.7 square meters were transferred to the church in the free use of up to 2050.

Since March 2014 Crimean government with infringement of norm of international and Ukrainian legislation started to dispose of state, communal and private property. April 18, 2014 Vladimir Konstantinov made changes in resolution № 2059-6 / 14 in the Resolution of the Verkhovna Rada of the Autonomous Republic of Crimea on May 16, 2001 № 1801-2 / 01 “On the transfer of the Crimean Diocesan Office of the Ukrainian Orthodox Church Kiev Patriarchate  the part of the building, located on the st. Sevastopolskaya, 17, in Simferopol. ” Of course, Ukraine did not give consent to such a changes, and therefore, such actions were illegal. This resolution  passed to Crimean Diocesan Office of the UOC-KP  also all the property  on hire basis area of ​​1475.7 square meters, on the street. Sevastopolskaya, 17, in Simferopol  until 2050, but with the  rent definition  on determined      calculation technique (http://crimea.gov.ru/content/uploads/files/sbornik/2014-04-3.pdf ).

As a result, the Ministry of Property and Land Relations of the Crimea became the lessor for the UOC-KP, which has prepared a so-called additional agreement № 3 to the contract even 2002 (!). This agreement (dated 30 January 2015) was inexplicably changed the total area of ​​the premises, which was used by the UOC-KP – reduced from 1475.7 m to 1016.1 sq.m.

But the most important “innovation” – a calculation of rent. Crimean authorities  established the rent at 90,906.62 rubles for month (Appendix). Until 2014, the UOC-KP  used the premises free of charge. Representatives of the UOC-KP have repeatedly appealed to the Crimean authorities for preservatoin of the previous conditions of the rent ( the free use), because  this church could not pay.

In addition, in May 2015 the Ministry of Property and Land Relations of the Crimea was organized tenders as auction to right enters into a lease contract for part of the premises that was used by the UOC-KP, namely the Crimean Orthodox Spiritual Center. This was about  a part of the property area of ​​112.6 sqm on the ground floor of the building at st.Sevastopolskaya, 17, Simferopol.

As a result, the auction winner became a social  non-commercial movement for development of small and medium-sized business in the Republic of Crimea “RAZUM” (http://kryminvestproekt.nethouse.ru/static/000/000/516/343/doc/a6/93/ace0ee14f6a5c03a95d2256a0624af22be92.pdf) which was engaged in business consulting. Thus, the representatives of this movement had to take part of the premises, which were located in the same building where the UOC-KP.

Crimean Ministry informed  the representatives of the UOC-KP that  the term of  lease of the premises at 112.6 sqm on the ground floor of the building at Sevastopolskaya st. , 17 expired on August 21, 2014. However, the ministry notified about it only in 2015, after the auction has already passed.

Representatives of the UOC-KP appealed to the Arbitration Court of the Crimea, to annul the decision of the Crimean Ministry of the premises  regarding  112.6 meters, which since 2004 was used by the UOC-KP. However, the Ministry of Property and Land Relations of the Crimea  filed a counterclaim. In this lawsuit the ministry required not only the release of the premises of the UOC-KP (112.6 square meters on the ground floor) to transmit its public non-commercial movement  “RAZUM” (UPM), but also to exact from a representative of the UOC-KP penalty payment for “groundless use of property for Between August 21, 2014 to September 30, 2015 ”  591,128.65 rubles, in total.

January 21, 2016 the full text of the decision of the Arbitration Court of the Crimea was published (16 pages). It’s not hard to understand  which side took the court in this “dispute”. All the claims of the representatives of the UOC-KP court dismissed, but a counterclaim of the Crimean Ministry of the court allowed.

As a result, the judge I. A.  Sokolova obliged not only to vacate an area of ​​112.6 sqm on the ground floor of the building at Sevastopolskaya st., 17, Simferopol, but also to exact from the Crimean Orthodox Spiritual Center of the penalty   payment  591,128.65 rubles, in total. In addition, the court decided to collect from the Centre for the “federal budget” court costs to consider the counterclaim 16383 rubles ,  in total (Appendix).

Of course, these amounts to the representatives of the UOC-KP is not possible to pay. Such economic sanctions and attempts to confiscate the premises of the UOC-KP is a serious threat for the existence of a church in Crimea. In addition, if part of the building (it is about 112.6 square meters) takes OND “RAZUM”, the business consultants will pass   through the premises of the Cathedrel. In addition,  all public communications of the building are concentrated at these square meters.

Archbishop Clement told to the Crimean human rights group that he was going to continue further the fight with  the use of international mechanisms and courts.

The Crimean human rights group will continue to monitor violations of religious freedom on the peninsula, and in particular the situation of pressure on the Ukrainian Orthodox Church of the Kiev Patriarchate in Crimea.