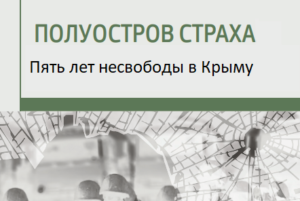 Ukrainian human rights experts have prepared the third edition of ‘Peninsula of Fear: Five Years of Non-Freedom in Crimea’. The book, based on consolidating a number of facts and recreating a chronology of occupying Crimea by the Russian military men and security forces, reviews main aspects of violating the human rights on the peninsula for five years of occupation. A substantial part of the book is fundamental documents providing an international legal evaluation of RF actions in Crimea, legal and regulative RF documents used by Russian authorities to expand unlawfully the Russian laws validity on the occupied territories, acts of Crimean authorities de facto approved to support the occupation of Crimea by Russia.

The book will be presented at the ‘Book Arsenal’ on May 24th for the first time.

We invite everybody to attend this event to be held on May 24th, Friday, 12h00 – 12h45, EXLIBRIS Hall, Book Arsenal. A copy of the book may be received free of charge at the presentation.

The event is organized by the Crimean Human Rights Group.

Review on the human rights situation in Crimea in January 2020