Главная → News → An ambulance was called to the ward of political prisoner Vladimir Balukh, the diagnosis is not made yet 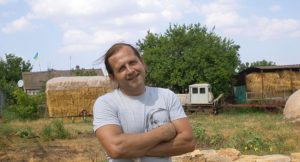 On the morning of 28 December an ambulance was called for the Ukrainian activist Vladimir Balukh in Crimea. This was reported by Natalia Balukh, the wife of the activist.

The Ukrainian is currently kept in Crimea, in the temporary detention centre in Razdolnoe village. According to his wife, a doctor who examined Vladimir, did not diagnose him, did not give any documents as an evidence of his visit, however, he has appointed the list of medications, which later was passed to the wife of Balukh.

Natalia Balukh said that the drugs that she bought today were handed over to the duty of the isolation ward.

Among the drugs there are antibiotics that were assigned doctor, medicine from rhinitis and cough, as well as tablets for the treatment of the gastrointestinal tract diseases.

It is currently unknown if Vladimir received the drugs. Accurate diagnosis of the Ukrainian is also unknown.

Natalia Balukh said that the last she saw Vladimir on 27 December at the court hearing.

“We were not allowed to communicate. He looks sick and thin, “- the wife of Vladimir Balukh reported.

On 27 December, at “Razdolnensky district court” of Crimea a hearing was held regarding the extension of a preventive measure in the form of detention for the Ukrainian activist Vladimir Balukh. Balukh was taken to the court hearing from the pre-detention centre Simferopol.

The judge Alexander Abelyashev decided to keep the detention of the Crimean until 5 February, 2017. Previously, the same judge elected preventive measure for Ukrainian until 6 January, 2017.

Earlier Vladimir Balukh reported that he urgently needs medical care. He has chronic bronchitis, and the disease worsened in the crowded jail cell. At the moment there are 34 persons on 14 beds in the chamber where Balukh is being kept