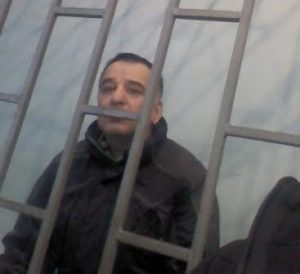 When entering Crimea, the FSS detained and illegally keeps for over 6 months a citizen of Ukraine of Afghan origin Kabir Mohammad, whom the Russian authorities want to extradite to Iran as an allegedly dangerous criminal which is wanted by Interpol for a long time.

Crimean human rights group was informed about this by his wife Oksana Mohammad.

According to Oksana, on September 14, 2016 at the Armyansk checkpoint Russian during the verification of documents border guards stated that Interpol is looking for Iranian citizen Niyazi Mohammad Kabir’s son Abdulatif, who since November 2010 is on the international wanted list for the “fraud case” with the verdict No. 8909972650701351 issued by the branch No. 103 of the general criminal court of the Justice Department of the Islamic Republic of Iran.

As it can be seen from the document, the surname of the wanted person is Niyazi, with the double name Mohammad Kabir. The Ukrainian Afghan has a surname – Mohammad, and the name Kabir, his father Mohammad Kadir is a colonel who once served in Afghanistan in the department of the Ministry of Defence for international relations and had family ties with the former leader of the Republic of Afghanistan, Babrak Karmal. Thus, not all the data coincide.

“That night I cannot remember calmly. My husband was taken away, and for many hours I did not understand what was happening, where he was, or what happened to him. I’m with young children, without Russian money, because it’s impossible to change money in Crimea at night. Children are tired and crying, I’m going to Armyansk. But I was not allowed to enter the police station where my husband was taken, and I stayed with the children on the street at night. Already in the morning I found a man who felt sorry for me and changed money for me.

Then there was the first court, and only then I began to understand that my husband could be extradited to Iran as another person. And all these despite the fact that he had never been in this Muslim country before, he does not have marks on entry or exit there, but there is a Schengen visa that was open until 2017, according to which we travelled a lot around in Europe, and in none of the countries we were detained because my husband was a criminal who fled Iran,” Oksana Mohammad told the Crimean human rights group.

To confirm the identity of her husband the woman asked for help in Afghanistan in Kabir’s homeland.

The consulate of the Islamic Republic of Afghanistan in Russia sent an official response to the court of the city of Armyansk that the identity of the detained Mohammad Kabir is confirmed there. In a letter, the consulates state that Mohammad Kabir, detained in Crimea, has nothing to do with the terrorist wanted by Interpol. According to the embassy, ​​the name of the father of the detained citizen of Ukraine is not Abdulatif, but Mohammad Kadir. But it did not work. Mohammad Kabir is not returned to Ukraine, and has no right to be extradited to Iran, since he is not a citizen of Russia. A Ukrainian Afghan has already been kept in Simferopol detention centre for more than six months. During this time, the Crimean courts several times extended the measure of restraint in the form of detention for him. Oksana Mohammad concluded an agreement with Crimean lawyers, but all their attempts to appeal these decisions were in vain. 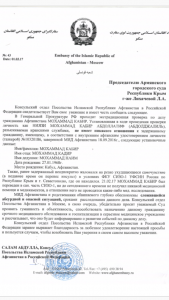 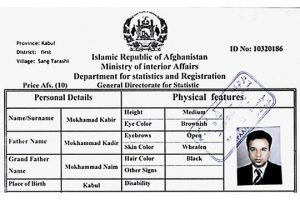 According to his wife Kabir, on 17 March in the “Supreme Court of Crimea” another appeal on the decision on the measure of restraint of Kabir Mohammad was considered. “Judge” Osodchenko Anatoly Nikolayevich declined Mohammad’s lawyers’ requests for an interpreter and left the decision on keeping him in custody.

Oksana asserts that her husband’s case does not contain the verdict of the Iranian court, there is no official request from Iran, and it is impossible to understand in the submitted photo who is the person because the photo is fuzzy, and the man being sought sits sideways in the company of other people. 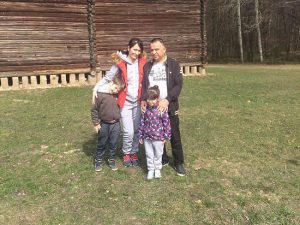 Mohammad Kabir has lived in Ukraine since 1986. In Donetsk, he graduated from the medical institute. He had a residence permit. In 2007, he married a girl from Poltava Oksana Nesterenko, in 2008 his son Amir was born, in 2010 his daughter Albina was born. In 2012, Kabir received Ukrainian citizenship, and in 2016 – Ukrainian biometric passport. The family lives in the city of Borispol in the Kiev region. In Afghanistan, Mohammad and his relatives have a small family business – a plant for drying raisins, so once a year Kabir flew to Afghanistan.

In 2015, Kabir suffered a stroke, according to medical documents – “cerebral infarction in the basin of the left MCA.” Doctors advised to visit the sea more often. Therefore, Oksana and Kabir decided to go to Crimea together with the children in September 2016.

“We are not particularly interested in politics, we live with our family. Friends went there and everything was fine,” Oksana explained the decision of the family.

Oksana says that her husband suffered a second stroke in the pre-detention centre, and that he was not given any help there. “Some time ago, Kabir’s health deteriorated sharply. He rambles, forgetting names and dates, and he was not cured in jail. In the detention cells it is cold, for 15 beds there are 30 people. We filed a complaint with the European Court of Human Rights, and on 19 March I applied for help to Valerya Lutkovskaya, the Verkhovna Rada of Ukraine Commissioner for Human Rights,” Oksana says.

“In the prison the husband was transferred to the medical unit and was forgotten. Kabir has not been treated, and now they do not provide medical assistance, and I cannot transfer medications from Kiev to Crimea, because some special Russian certificates are needed, “Mohammad added.

The Interpol division of the Russian Interior Ministry responded to Oksana Mohammad’s request, advising her to apply to Iran: “Dear Oksana Vladimirovna! In connection with the fact that the initiating country Iran has confirmed the search for Niyazi Mohammad Kabir, you need to apply to the competent authorities of this state, “- said in the response of the Interpol Ministry of Internal Affairs of Russia.

Oksana Mohammad suggests that in Crimea they are afraid to admit that they made a mistake by detaining her husband.

Experts of the Crimean human rights group believe that failure to provide proper medical care to a person with such a serious diagnosis can lead to a violation of the right to life guaranteed by article 2 of the European Convention on Human Rights. In addition, other articles of the Convention may be violated in this case.