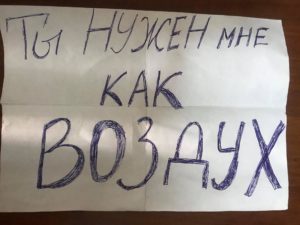 An administrative offence report was drawn up on the spouse of the political prisoner – Marlena Asanov, a defendant of the second Bakhchisarai Hizb ut-Tahrir case, on Article 17.3-2 of Code of Administrative Offence of the Russian Federation (CoAO) for non-compliance with the legal order of the court officer.

After the court session at the Southern Area Military Court of Rostov-na-Donu, Mrs.Ayshe Asanova left the courtroom where the “case of the Crimean Muslims” (the second Bakhchisarai “Hizb ut-Tahrir” group) was being considered.

In the court building corridor, the woman wrote a note that she showed her husband through the doorway. After that, Mikhail Chernovol, the court officer approached her and began to demand a passport. Lawyers Aleksey Ladin and Ayder Azamatov, who turned out to become eyewitnesses of what was happening, explained to the officer that his actions were unlawful.

The officer reacted by drawing up an administrative offence report on Mrs. Asanova. The Crimean Human Rights Group (CHRG) was informed about this by Aisha Asanova and Aleksey Ladin.

The administrative offence report – the CHRG has a copy at disposal – states that “Mrs. Asanova communicated with the accused Asanov with a poster containing personal information” though the officer had warned before the court session start “about the ban for visitors to communicate with the defendants.”

As Mrs.Asanova explained, the text on the sheet of paper that she showed her husband was: “I need you like air.” As she said, she wanted to support her husband with this note.

“When the court ended, I went out into the corridor, and sat on a bench. To support my husband, I wrote a note on a piece of paper in the hope that my husband would see it in the doorway. The court officer saw this, I immediately rolled up this sheet of paper. He (the officer – a CHRG note) tells me: why are you showing posters here? I say: this is not a poster, but just a sheet. Then, without giving any reason, he began to demand my passport. Later, lawyers came and began to explain to the officer that his actions were unlawful. This dispute lasted forty minutes. Then an administrative offence report was drawn up on me, ”Mrs. Asanova said.

According to lawyer Aleksey Ladin, the administrative case against Mrs. Asanova would be sent to the Court of Peace of Rostov-na-Donu Voroshylovsky Judicial District.

“The court officer argued that he would have tried to stop the communication between the audience and the defendant. But the fact is that, according to the federal law, such his actions are unlawful. Suppression of communication between the audience and the defendants is the responsibility of the police escort service. Moreover, there was no communication: Ayshe was in the court corridor at the door, her husband was in the “aquarium” of the courtroom. Ayshe did not plead guilty herself, and asked to call witnesses. As a result, the administrative file against her will be sent to the peace judge of the Voroshylovsky District of Rostov-na-Donu’, the lawyer said. 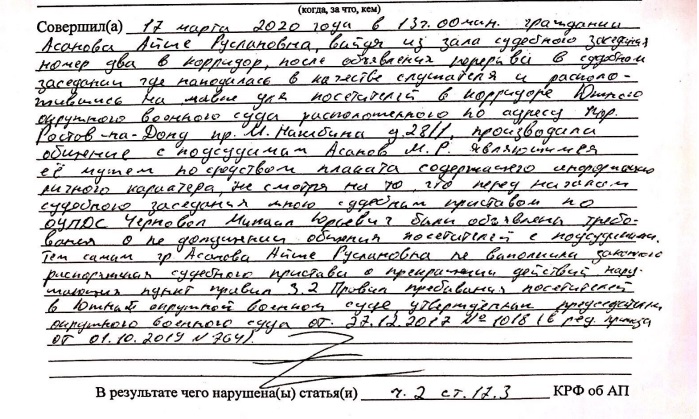