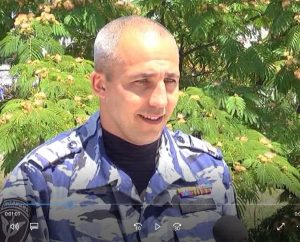 Crimean human rights group became aware of the name of “Berkut” officer, who beat up the Ukrainian Igor Movenko in Sevastopol for the Ukrainian symbols placed on the frame of his bicycle.

It is a former employee of the special task unit of the Ministry of Internal Affairs of Ukraine “Berkut” Vladimir Sukhodolsky, who in 2014 betrayed his oath and now serves in the Russian police.

According to the website of the “Office of the Ministry of Internal Affairs of Russia for the city of Sevastopol”, Sukhodolsky is an active member of the Russian special forces OMON “Berkut”, engaged in fighting sports.

“He is a candidate for master of sports in hand-to-hand combat and army hand-to-hand combat, the owner of the 3rd dan (black belt) in contact karate, is training his comrades in the Berkut,” – the website of the Russian agency states.

Back in 2009, Vladimir Sukhodolsky was a member of the Combat Sambo Federation of Ukraine and took part in the demonstration battles of combat sambo “Spetsnaz”.

If a person who owns such techniques, attacks a person, then in criminal law this equates to an attack with the use of weapons. This is another confirmation of the fact that Sukhodolsky deliberately inflicted bodily harm to the Ukrainian, but the case regarding the fact of beating of Movenko in Sevastopol was never initiated.

It is also known that the wife of the “berkut” officer Sukhodolsky is an “investigator” of the investigation department of the Ministry of Internal Affairs of Russia in Gagarinsky district of Sevastopol – Galina Sukhodolskaya. Thus, it is likely that Sukhodolsky and his wife use their official position to ensure that the attacker would not take responsibility. 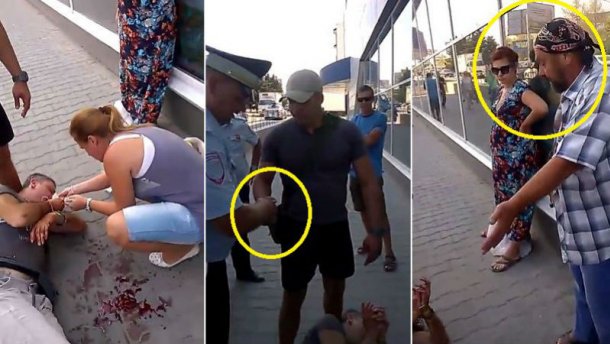 Earlier, the Crimean human rights group reported that on 7 September, 2016 in Sevastopol, a police officer beat Igor Movenko for the symbols of the “Azov” battalion placed on the frame of his bicycle.

On the scene of the accident arrived police and ambulance, which took Mavenko to the hospital. Doctors diagnosed an open cranio-cerebral trauma caused to the Crimean, a brain concussion, a fracture of the base of the skull, a jaw fracture, and a closed fracture of the nose bones, an eyeball contusion and other injuries.

The Crimean tried to force the police officers to open a case on the fact of his beating. He wrote official letters to the Investigative Committee, the Prosecutor’s Office and the police of Sevastopol. However, the case was not initiated. Instead, the injured Movenko was fined to 2000 rubles “for the spreading of Nazi symbols”.