Mr Vladimir Dudka, a Sevastopol resident, and ‘Ukrainian Commandos Case’ defendant, is celebrating today his 55th birthday. He is celebrating it not with the family and his friends but in the hard conditions of transferring from the Crimean Detention Center to Moscow one.

Where Vladimir is today remains unknown both for lawyers and relatives, because prisoners in Russia are transferred almost in full uncertainty.

Mr Dudka was born on September 30th 1964 in city of Sumy, graduated from Kaliningrad Higher Navy College, surveillance faculty, he used to be a master of radiolocation surveillance ship in Crimea. Since 2010 he had been a EOD expert of the Ministry of Emergency Situations of Ukraine in the team on Inkerman galleries mine cleaning, and in 2014 went on doing the same in Sevastopol for the RF Ministry of Emergency Situations. He remained in Crimea to be close to his little grand daughter.

Mr Vladimir Dudka was detained by RF FSB men on November 9th 2016 in the morning in Sevastopol, when he was going to hospital due to active gastric ulcer. The same day his old friends and former Ukrainian military men – Mr Aleksey Bessarabov and Mr Dmitriy Shtyblikov – were detained. On November 10th the RF FSB reported that a group of people preparing subversions in Crimea had been detained. On November 14th the R FSB disseminated video of staged interviews when Mr Shtyblikov and Mr Bessarabov stated as if they had collected the information for the Ukrainian Armed Forces.

The relatives had no information where the detained Sevastopol residents were for a week. 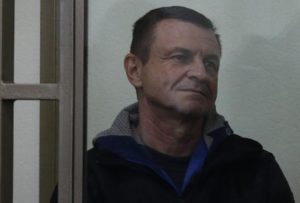 An independent lawyer managed to see Mr Dudka only on November 14th 2016. Contracted by the relatives of Mr Dudka, he found him in the Temporary Detention Unit of Bakhchisarai. The meeting was very short, only 17 minutes, because the lawyer was said, without indicating any reason, that Mr Dudka was to be urgently moved somewhere from the Unit. When speaking with the lawyer, he managed to tell that he was completely non-guilty, and he had made confessions under the pressure and threats for his family. The relatives were not allowed at all to meet him and provide with warm clothes and necessary things.

Later, during the court proceedings, Mr Dudka and Mr Bessarabov claimed that they had been tortured the first days after the detention, including the electric current used. But the RF Investigation Committee rejected starting a case on the fact of torturing.

The condition of Mr Dudka’s health just after the detention raised fears because he had been suffering of tachycardia and ulcer, and looked bad when he met the lawyer. At the eve of arrest Vladimir had asked for medical treatment due to the active ulcer, but did not manage to take the full curative course because of detention. When staying in the temporary detention unit, he was not given any medical treatment at all.

After the long staying in the Detention Center the health condition became worse, chronic diseases became active, and new ones appeared: hypertonia, prostatitis, and others.

Two years and a half of court sessions

The facilities where the ‘Ukrainian commandos’ planned to arrange explosions and other subversions’, as mentioned in the court, were Crimea Radio and TV Transmission center tower, a mobile gas turbine power station in Sevastopol, Black Sea Navy fuel supply shop no 482 and a radio mast for the navy facilities communication.

On November 16th 2017 the “Sevastopol City Court’ sentenced one of the ‘Ukrainian Commandos case’ defendants – Dmitriy Shtyblikov – to 5 years in the maximum security regime penal colony and a penalty of RUR200,000 when he, under pressure, had made a plea agreement with the investigation. None of independent lawyers was allowed to see him that may prove a pressure he was subject to during the investigation. He is now in the penal colony no 6 (Omsk City, RF). 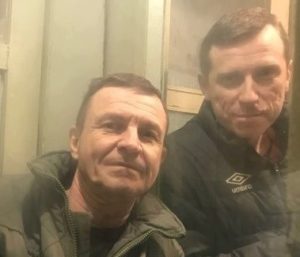 The court proceedings on the case of Mr Dudka and Mr Bessarabov who rejected admitting their guilt, lasted over 2.5 years. When the first court examination finished, the occupational ‘Sevastopol City Court’ failed to award a sentence and returned the ‘case of commandos’ to ‘the prosecutor’s office’ for removing the drawbacks on April 6th 2018.

On August 2nd 2018 the ‘Sevastopol City Court’ restarted the hearing on the merits. The Sevastopolers and their lawyers made numerous statements to the ‘court’ that the investigation methods had been unlawful, the evidence in the case was inadequate, and had been falsified.

For instance, Mr Vladimir Dudka said at the court that the mobile presented as physical evidence had been planted by the FSB men during the search. According to lawyer Sergey Legostov, most of dozens of CDs with audio and video surveillance of the Sevastopolers have no relation to the case at all. For instance, one of them shows how all three defendants were meeting in the café to celebrate the birthday of one of them.

Practically all court sessions were held in chamber. According to the relatives’ information, a loudspeaker was switched on in the corridor above the hall door during the hearings. Hissing coming from the loudspeaker made impossible for the people in the corridor to hear what was happening behind the door.

All these years the Sevastopolers were kept in the Simferopol Detention Center and transported from it to Sevastopol for court sessions.

Severe sentence. What to do then? 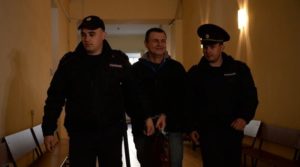 On April 4th 2019 ‘the Sevastopol City court’ sentenced Mr Vladimir Dudka and Mr Aleksey Bessarabov to 14 years in the maximum security regime penal colony. Both Sevastopolers were also imposed penalties: RUR350,000 for Dudka, and RUR300,000 for Bessarabov. The Ukrainian nationals were charged with RF CC Article 30-1, 281.2, 222.1-3 (Preparation to a subversion within an organized group; Unlawful procurement, storage of explosive substances or devices by organized group).

This award was passed by a penal of ‘judges’ chaired by M Igor Kozhevnikov, a RF national, former judge of Zadneprovsky district court of Smolensk.

Today this is the severest sentence within the ‘Ukrainian Commandos case’ in Crimea. The relatives think that such severe sentence has been passed to hide drawbacks, faked evidence, and, maybe, to frighten the sentenced and their relatives and other peninsula residents.

In addition, the court passed a special ruling on violations during interrogation and investigation addressed to the ‘prosecutor’s office of Sevastopol and head of ‘FSB department’ for Crimea. According to the defence, this means that the court recognized a part of documents falsified.

In their last speeches at the court both Dudka nd Bessarabov thanked everybody who supported them in Ukraine and declared their innocence once more.

The RF Supreme Court appointed October 15th 2019 for considering the appeal against the sentence. According to the lawyer’s information, the Sevastopolers have been recently transported from Simferopol Detention Center no 1 to Moscow. The relatives know that last week Mr Dudka was in the Krasnodar Detention Center, but they do not know where he is now and are very concerned.

‘The father has not been treated at all, his health condition has worsened seriously, he is suffering permanent pain in the stomach and the prostate gland. He has also got a hypertonia that should be treated, but nothing is done. There is no hope for court, as it has not been before. Our only hope is exchange, but when it will happen and whether it would happen, we do not know. If there is no exchange or the father is not included into the list, he would just die in the prison, since there is no treatment, and he has been sentenced for so long, while he is 55 already…’, the son of Sevastopoler told.