After the occupation of Crimea the peninsula authorities de facto have been forcing local people to obtain a RF citizenship. Those Ukrainian residents who did not want or was not able to obtain the occupational power documents, are consistently fined and/or deported from Crimea. This information is proven by findings of the study carried by the Crimean Human Rights Group analysts.

From the start of occupation to the end of June 2018, as PRAVOSUDIE RF GAS[1] website states, at least 8,479 cases were considered in Crimea and Sevastopol under RF CoAO[2] Article 18.8 ‘Violation of rules for entering the Russian Federation or regime of staying (residing) in the Russian Federation by a foreign citizen or a stateless person’, with a punishment decreed in 6,972 cases. It may be said that 82% of hearings finish with decreeing a punishment. The highest number of punishment judgements was ruled by ‘Leninsky District Court of Sevastopol’ – 948, ‘Zheleznodorozhny District Court of Simferopol’ – 851, and ‘Yalta City Court’ – 626.

Of 6,972 decrees only 4,153 were published by the PRAVOSUDIE RF GAS. Word ‘UKRAINA’[3] may be found in 2,086 decrees on punishment. These are decrees stating clearly that a persecuted person is a citizen of Ukraine or has a Ukrainian permanent resident card. When the decrees where Ukraine is not mentioned have been reviewed, it has been found out that a citizenship of persecuted person is not stated, so it may be assumed that such decrees may have been also ruled on Ukrainian citizens. 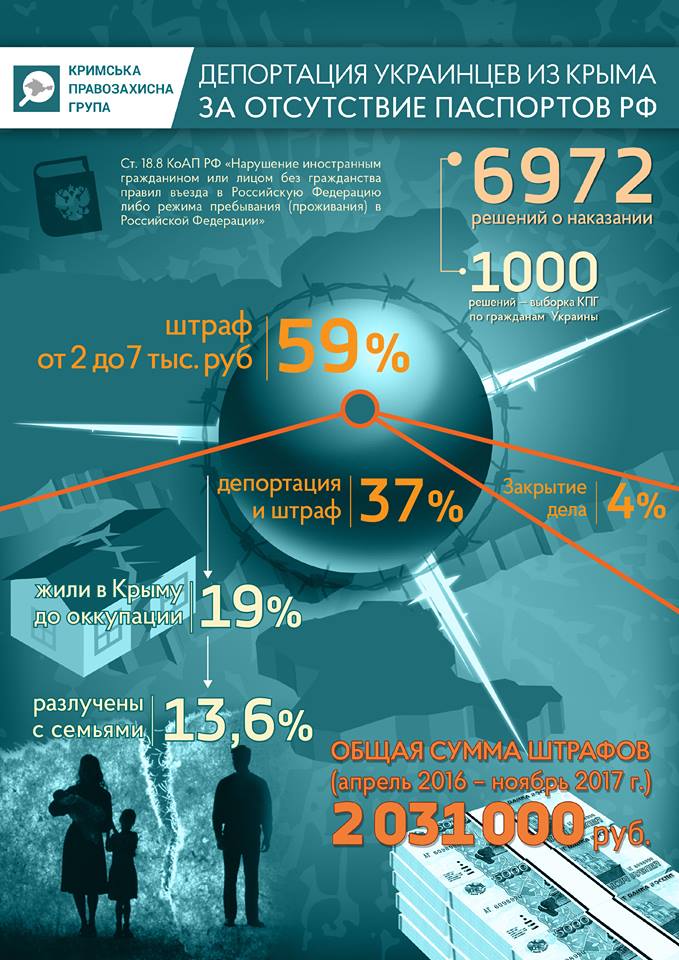 In 36.9% of reviewed decrees, a deportation as punishment, in addition to the fine, is ruled. It should be stated that at least in 79 cases Ukrainian citizens subject to deportation lived in Crimea at the moment of occupation. In 40 cases the deported people had families or close relatives left in Crimea.

It should be pointed out that these are not all punishment judgements issued against the Ukrainian citizens within this period. For instance, the citizenship of defendants under this article is not stated in rulings of Kerch and Dzhankoy Town Courts published at the PRAVOSUDIE RF GAS website, though in many cases they were citizens of Ukraine.

If 95.9% is taken as an indicator for all 6,972 punishment decrees under RF CoAO Article 18.8, about 6,650 people may be assumed to have been fined for the absence of RF documents from the start of occupation to June 2018.

If 36.9% is taken as indicator for 6,972 decrees, about 2,550 people, with far the majority among them being citizens of Ukraine, may be assumed to have been deported from Crimea for the period of occupation. Many of them lived in Crimea at the moment of occupation. Some of them, by ‘court’ rulings, were separated from the close relatives.

The Russian Federation violates a right of movement and residence by its actions. The RF as occupying power shall provide the conditions on the occupied territory of Ukraine when non-possession of RF documents by Ukrainian citizens should not become a reason for limiting their civil, social or economic rights.

Examples of court rulings prove that a deportation decree is ruled even when a Ukrainian citizen has well-established social ties in Crimea. Such persecution is caused by ‘absence of documents required for staying on the territory of the RF’ and ‘an excess of time limit for staying on the RF territory’.

Crimea is a territory of Ukraine, and the RF shall create equal conditions for Crimean residents as state controlling this territory de facto. Thus, application of limits for Ukrainian citizens as foreigners by the RF authorities in Crimea violates the international law provisions. A foreign state shall not limit rights and freedoms of the citizens within the territory of their state. Such limits imposed by the RF should be considered a discrimination by citizenship and political opinions as well as by availability of documents issued unlawfully by the RF in Crimea, and not differences related to the citizenship.

These examples verify that the Russian Federation violates the right to freedom of movement and residence, the right to work and free choice of employment, the right to public health, medical care, social security and social service stipulated by Article 5 of the International Convention on the Elimination of All Forms of Racial Discrimination.