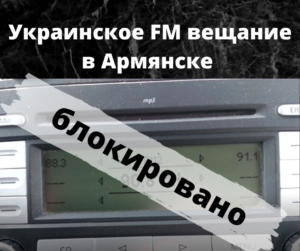 The Crimean Human Rights Group held the next monitoring of the FM radio station broadcasting in the north of peninsula in March 2020.

The monitoring showed that Ukrainian radio station broadcasting through towers located in Chongar and Chaplynka is completely blocked with the Russian FM stations in 10 settlements of Northern Crimea. In other 9 settlements the signal of Ukrainian stations is partly blocked.

Since the end of previous year, the situation with blocking the broadcasting in some settlements has become worse.

For instance, in December 2019 the CHRG monitors recorded broadcasting of 4 Ukrainian FM radio stations in Armiansk. The monitoring held in March 2020 demonstrated the total absence of the Ukrainian FM broadcasting in the town.

Moreover, if last December KULTURA Radio was heard in 5 settlements, now it is heard only in one.

KULTURA and PROMIN’ radios can be heard in one settlement of the entire list, NV – in three, UKRAINSKOYE RADIO and ARMIYA FM in four, and KRYM.REALII in six of 19 checked.

Broadcasting of the Ukrainian FMs via the Broadcasting Tower located in Chaplynka in the Northern Crimea is jammed by such Russian stations:

Broadcasting of the Ukrainian FMs via the Broadcasting Tower located in Chongar in the Northern Crimea is jammed by such Russian stations:

The Crimean Human Rights Group holds regularly missions for monitoring the broadcasting in northern Crimea. The Russian authorities have seized unlawfully the Ukrainian radio frequencies in the peninsula and have been blocking the Ukrainian FM broadcasting.

Thus, the Crimea occupying authorities have deprived the Ukrainian nationals of access to the information of independent Ukrainian radio stations. Doing this, the RF authorities neglect completely the fact that jamming radio signals is forbidden by the International Telecommunication Convention of 1947 and the UN General Assembly in 1950.

The actions of the Russian authorities in Crimea lead to abolishing the pluralism of opinions and replacing in fact the independent media with the sources of state Russian propaganda. With these discriminatory practices, it becomes in principle impossible for the Crimeans to receive information about Ukraine and human rights violations that are common in Crimea. Kremlin-controlled Russian media are hiding most of these facts from residents of the peninsula.

Information isolation of the occupied peninsula is intensifying, that constitutes a severe violation of free speech standards as well as provides the occupying power additional opportunities to disrespect further the human rights and freedoms in Crimea. The world community must increase and increase the pressure on the Russian Federation authorities: