The situation in the field of medical services in Crimea has deteriorated markedly over the past two years. Such a conclusion was made by the monitors of the Crimean human rights group that studied the state of health care in Crimea.

In recent years, the number of complaints about medical care in the Crimean hospitals and clinics has increased. Crimea Residents complain about the lack of doctors and nursing personal, rudeness, bureaucracy and corruption, as well as crowded queues.

Sometimes people have to wait up to 2 weeks to get to the GP in clinics. Queue for regular analyses may also take up to 2 weeks.  Sometimes you would need from one month or more if you want to make an appointment with a non-diversified specialist.

According to the residents of Kerch, he applied on 23 April 2016 to the city hospital number 2 for the coupons for the appointment with the district doctor Ivanova. However, he had his appointment approved only for 5 May 2016.

Another resident of Crimea with temperatures above 38 degrees had to wait for the therapist in the queue for more than three hours in the city polyclinic №1 in Kerch.

“Call an ambulance to the house is also unreal, they just do not go or the phone is busy! People in the queue would rather finish off the patient, than will let him go before you. Why Prosecutor’s Office is not involved in this issue”, – resident of Crimea is complaining in his letter, the text of which has the CHRG.

Crimea Residents also complain about the service in the city hospitals and health care workers, accusing them of negligence and boorish attitude to people.

(The video of the queue in the children polyclinic of Kerch that was made on 22 April 2016)
https://youtu.be/3NZklDmmIrs
Another resident of Kerch visited several city clinics and also informs about the huge queues.

“When I had an urgent appointment with a cardiologist, I was told that I cannot be accepted, because there are queues everywhere, there are no appointments left, and there is no place for me”, – resident of Crimea writes in her blog.

“Grandmother, who was sitting with a pulse of 30 beats per minute, was greenish colour and was not accepted, and you know why? Just because she did not have a card and coupon, she could not physically come down to the first floor to stay in the queue to receive it from the front desk”, – said the author of the blog.

It is almost impossible to get an appointment with a non-diversified specialist in Sevastopol. The queues are for the month ahead. Sevastopol residents complain that even in private clinics there are long queues to some specialists. 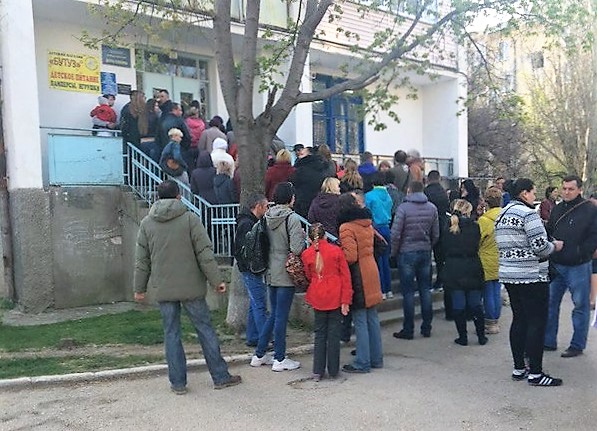 According to employees of medical institutions that were interviewed by the monitors of the CHRG, physicians retire from medical institutions due to the introduction of a new remuneration system in Crimea. Now the monthly salary of the doctor in the budget hospital includes a salary and a so-called incentive part of the salary.

According to the interlocutor of the CHRG, physicians are not satisfied with their salaries: “The nurse gets 5-6 thousand plus incentives of up to 100% of salary, the doctor gets about 25 – 30 thousand rubles, together with incentives… But these incentives depend on numerous inspections of hospitals: Health Inspection Services, fire, engineering supervision, internal audits, and more. The controllers remove points and incentive payment depends on this”.

According to employees of medical institutions, the amount of such inspections has increased for several times in Crimean hospitals. For this reason, physicians retire and go to work in the private medical centres. This problem was confirmed by a nurse from Sevastopol in a Twitter.

The situation is difficult not only in polyclinics but also in Crimean hospitals. Acute shortage of doctors, who quit and go to work to private clinics because of the bureaucracy and low salaries.

According to the source of the CHRG, there was not a single doctor in the neurosurgical department in the city hospital № 1 of Kerch for three months.

“This is the city hospital where the victims in the car accidents, the victims of attacks, and so on are brought. In case of emergency surgeries, neurosurgeon from another hospital was invited informally. By the end of April 2016 in the central hospital of Kerch, which serves nearly 50 thousands of patients plus all the emergency cases there is one surgeon, a neurologist on 1.5 rate, there are no urologists at all, there is a severe shortage of physicians, so paramedics do their work in some sectors “- said our source, who asked not to publish his name.

Bureaucratic procedures are taking away a significant portion of physicians working time. “Doctors have to fill in a lot of documents so the Health insurance (insurance fund) paid the doctor’s work. Even a small mistake in the recording or inaccuracy – and the doctor will not be paid. Doctors are caught even on small bribes, so many specialists who are not ready to live just on their salary and do not want to take risks quit. Other specialists go to work to other regions of Ukraine, most go into private business”, – said the source of the CHRG.

Another doctor from Kerch also reported to the Crimean human rights group that there is much more bureaucracy in his work now.

“It is necessary to fill out a lot of documents so the insurance company would pay the patient’s appointment. For the last 2 years I scribbled more paper than for 18 years earlier. Health insurance provides penalties for improper treatment, examination, filling out of documents. The company checks each year and penalties are very large, so that’s why doctors are running from governmental hospitals”.

Additional queues at polyclinics are also created by a so-called free medical examination. Older people massively go to pass a medical examination, which also leads to queues in clinics. In addition, many Russian citizens from different regions of Russia now arrived in Crimea. “As a doctor I see people from Komi, Murmansk, Tyumen … pretty much all the regions, and it also creates  queues, even in private clinics”, – says one of the doctors.

Problems with the call ambulance

Another problem in Crimea – is a call ambulance. There were complaints that in case the ambulance is called by people older than 70 years, according to the management order, it takes the call only in emergency cases. In case of high blood pressure and heart pain, the ambulance may not go. The operator records the patient’s data and reports it to the local clinic, and then a paramedic has to come home to such a patient.

Because of high volume of such calls, paramedics do not always manage to visit all the patients. If a call was received after 2 p.m., most likely a paramedic will come the next day.

The quality of Russian drugs, according to the Crimean physicians is poor and there are a lot of counterfeits. The doctors themselves ask relatives and friends to bring drugs from the mainland Ukraine. This information was confirmed to the CHRG monitors in pharmacies in Kherson region. Crimean residents with huge lists of medicines for themselves, their family and friends often come to these pharmacies. The monitors of the CHRG in Kiev pharmacies observed a similar situation. In particular, according to the pharmacist from one of the pharmacy shops a medicine “Citramon” in her pharmacy was out of stock after Crimean residents bought it that day in big amounts.

Crimean Ministry of Health at the end of 2015 stated that the shortage of medical personnel in Crimea is about 30%. Anton Shaklunov the Crimean Deputy Health Minister reported this during the press conference in Simferopol.

According to Anton Shaklunov, basically there are not enough physicians, paediatricians, GPs, “emergency” staff and laboratory technicians.

“All the problems of the Crimean medicine now, primarily associated with personnel deficit,” – said Shaklunov, adding that the biggest shortage of staff is now observed in the initial medical link in the countryside. Here employees’ deficit reaches 60%.

At present the Crimean government recognizes an increase in mortality rate among the population of the peninsula. This was discussed at the meeting of the commission on the implementation of measures aimed at reducing mortality and improving the quality of life of the population of Crimea on 26 April, 2016, chaired by Vice-Premier of the Crimea Alla Pashkunova.

“Despite the slight increase in the mortality rate, the vice-premier noted that the fertility rate in 2015 has not decreased in comparison with 2014 year”, – stated the press service of the Crimean Council of Ministers.

Nariman Dzhelial, Asan and Aziz Akhtemovs Will Be Kept in Detention Until October 26