“Ukrainian saboteurs’ case” is a gross falsification, illegal methods of investigation, tortures and psychological pressure. In the “case of saboteurs” Crimean Human Rights Group documented human rights violations against the citizens of Ukraine, which give the reason to consider them as political prisoners.

This statement was made by the head of the Crimean Human Rights Group Olga Skripnik on 23 January in Strasbourg during the PACE winter session at the event “Tortures, enforced disappearances, political persecution: Crimea asks for justice”, which was organized by the Permanent Delegation of Ukraine to the Parliamentary Assembly of the Council of Europe, the Crimean Human Rights Group (CHRG) and the Crimean Tatar resource centre. 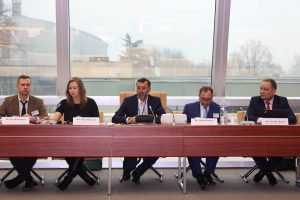 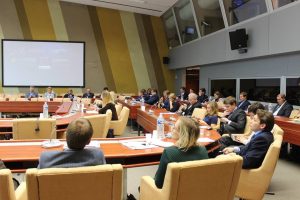 In the period from August to November 2016 9 citizens of Ukraine were detained in Crimea (the Russian Federal Security Service calls them as “members of the terrorist group the Ministry of Defence of Ukraine”). Among those detained are: Evgeny Panov, Andrey Zahtey, Redvan Suleymanov, Vladimir Prisich, Dmitry Shtyblikov, Alexei Bessarabov, Vladimir Dudka, Gleb Shabliy and Alexi Stogniy.

“Torture, physical and psychological pressure were applied to the Ukrainian citizens; as a result of those they were forced to plead guilty and give false testimony against themelves,”- reported Skrypnyk. 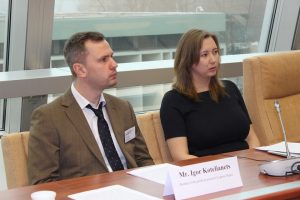 Igor Kotelyanets, the brother of the political prisoner of the Russian Federation – the Ukrainian Evgeny Panov, reported the details he knew about the case of his brother. “False confessions were beaten out of Yevgeny Panov under torture: he signed all the documents that were given to him by the Russian Federal Security Service, not knowing what was there, and spoke on the camera following their dictation “, – reported Kotelyanets.

Now Evgeny Panov is contained in Lefortovo pre-detention centre in Moscow. His case has not yet been transferred from Crimea to Moscow. Thus, the investigation is trying to prevent the lawyers to carry out full protection of Eugeniy. Since the investigating authorities and the accused are at a distance of fifteen hundred kilometres from each other, lawyers are not able to be in two places at once. The Russian authorities still do not allow the Ukrainian consul to meet with Evgeniy Panov, “- said Kotelyanets.

Similar tortures were applied to other Ukrainians that were detained by the Russian Federal Security Service in Crimea.

“After the arrest of Andrei Zahteya, he transported to some building with a hood on his head; he was beaten for two days to admit the guilt that he is a part of the group of saboteurs, who prepared the explosions in Crimea. Andrei has got the wounds on his wrists from electric shocks applied to him. Since Andrei refused to take the blame for something that he did not commit – terminals were clanged to his genitals. He lost consciousness because of the pain.

Rimean citizen, employee of Ministry of Civil Defence and Emergency Response Vladimir Dudka was arrested in the morning on the way to the hospital, where he was going with the aggravation of gastric ulcers. For more than a week family could not find Vladimir. Later it became known that two weeks Dudka was kept in unknown room without medications that he is prescribed by doctors due to the heart and stomach disease, “- said Kotelyanets.

Kotelyanets, the brother of the political prisoner Eugene Panov, noted in his speech that all these fabricated cases against the Ukrainians are the integral part of an aggressive Russian propaganda, which aims to discredit Ukraine in the eyes of the world public, to intimidate the population of Crimea by the alleged threat from Ukraine.

The head of the CHRG Olga Skrypnyk added that the presumption of innocence has been violated in relation to the detained citizens of Ukraine. Russian television regularly shows videos with comments that the figures of the “Ukrainian saboteurs case” were guilty of serious crimes. But their guilt has not been proved. Russian Federal Security Service investigators fabricate evidence for the prosecution.

“Numerous violations of human rights in relation to “Ukrainian saboteurs” show on unjust, politically motivated persecution of Ukrainian citizens; they have become a tool of the Russian leadership in the information war against Ukraine”, – the human rights activist summed up.

Ukrainian human rights activists demanded that the Russian Federation would immediately review the judicial decisions that were taken in respect of political prisoners.

“It is necessary to respect the right to a fair trial. Also, the Russian Federation must eliminate all the factors which point to the fact that deprivation of liberty was applied with the violation of the right to a fair trial, and other rights and freedoms guaranteed by the Convention for the Protection of Human Rights and Fundamental Freedoms and the International Covenant on Civil and Political Rights. In addition, the Russian Federation should cancel unreasonable decisions regarding the detention of Ukrainian citizens “, – said in a statement of the CHRG. 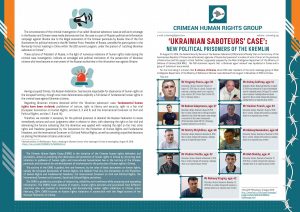 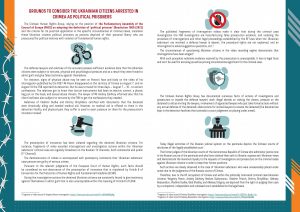