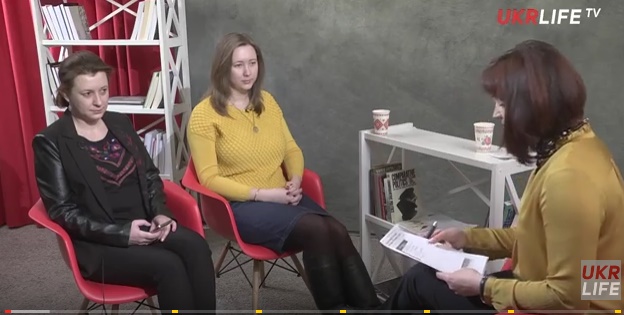 Ms Olga Skrypnyk and Ms Irina Sedova, representatives of the Crimean Human Rights Group (CHRG) told on camera at UKRLIFE.TV what a new wave of scaling back rights and freedoms had brought to Crimea: escalation of political repressions, militarization of public opinion, fake news and cultivation of hatred to Ukraine at schools.

In terms of the Convention on the Rights of the Child, working with children is to be specifically highlighted.

Ms Irina Sedova, CHRG analyst, has announced on air a dedicated review on the militarization of occupied Crimea by the Russian Federation.

Convention on the Rights of the Child, Article 29.1, states that the child shall be prepared for responsible life in a free society in the spirit of understanding, peace, tolerance, equality of sexes, and friendship among all peoples, ethnic, national and religious groups and persons of indigenous origin.

The experts explained why Russia should not propagate its army in occupied Crimea. Educating the children in a positive attitude to the army, military people and paramilitary detachments, inducing the children and the youth to the military services in the army of occupying state, creating a positive image of war lead to infringement of this basic right stipulated in the international instrument ratified by the Russian Federation on August 23, 1993.

Ms Sedova told about the actions on militarizing the conscience of children and the youth in Crimea – so called ‘military and patriotic education’.

‘During such education activities children and the youth are taught to use firearms and to wear military uniform. The children are shown various types of weapons, and given hand-to-hand fighting lessons as well as military science fundamentals. One of major values that is impressed in the children at such lessons is victory gained in the war through a military conflict. With such education, the Crimean occupation and actions of paramilitary detachments are legalized in the children’s mind. Thus, residents of the Ukrainian peninsula are taught since the childhood to be aware of themselves as citizens of Russia and be prepared to defend the interests of the occupying state including military service in its army or paramilitary detachments’, the expert explained.

A pre-school age child holding a machine carbine at Race of Heroes event.

According to Ms Irina Sedova’s information, a lot of such propaganda is carried through the RF education system that is de facto in place in Crimea.

‘Since late March 2014 the implementation of the RF Strategy on Educating and Treating Children has been launched in Crimea.

This strategy, in particular, states that one of the objectives for children education up to 2025 is ‘to raise children in patriotism, pride for their Motherland, readiness to defend the homeland’s interests, responsibility for the future of Russia through developing the children patriotic education programs including a military patriotic one’.

The RF has dedicated national programs ‘On Patriotic Education of Russian Federation Citizens’ which implementation in Crimea started in April 2014.

(official website of the National Program: ‘On Patriotic Education of Russian Federation Citizens for 2011 – 2015’)

The National Program ‘On Patriotic Education of Russian Federation Citizens for 2016 – 2020’ is being now implemented in Crimea.

One of the national program objectives is a military patriotic education of citizens of Russian Federation and development of young people in positive motivation to the military service.

However, the Geneva Convention relative to the protection of civilian persons in time of war of 12 august 1949, Article 51, forbids any propaganda which aims at securing voluntary enlistment on the occupied lands. The same Convention article forbids the Occupying Power to compel protected persons to serve in its armed or auxiliary forces.

Since April 2014 system-related violations of this legal provision have been recorded in Crimea.

For instance, on 17 July 2015 in order to promote enlistment in the Southern Military Region an exhibition of military equipment was held in Kerch in front of Shipbuilders’ Palace. 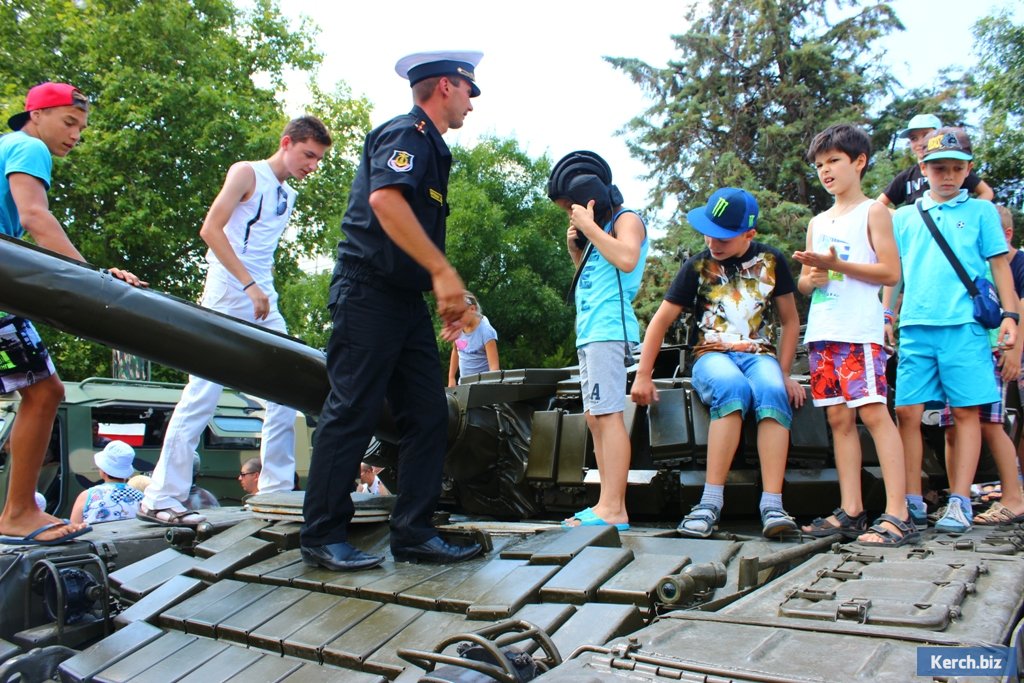 Military men playing with children on the tank during
YOUR CHOICE – POLITENESS Event promoting conscription to the RF army, Kerch, 17 July 2015 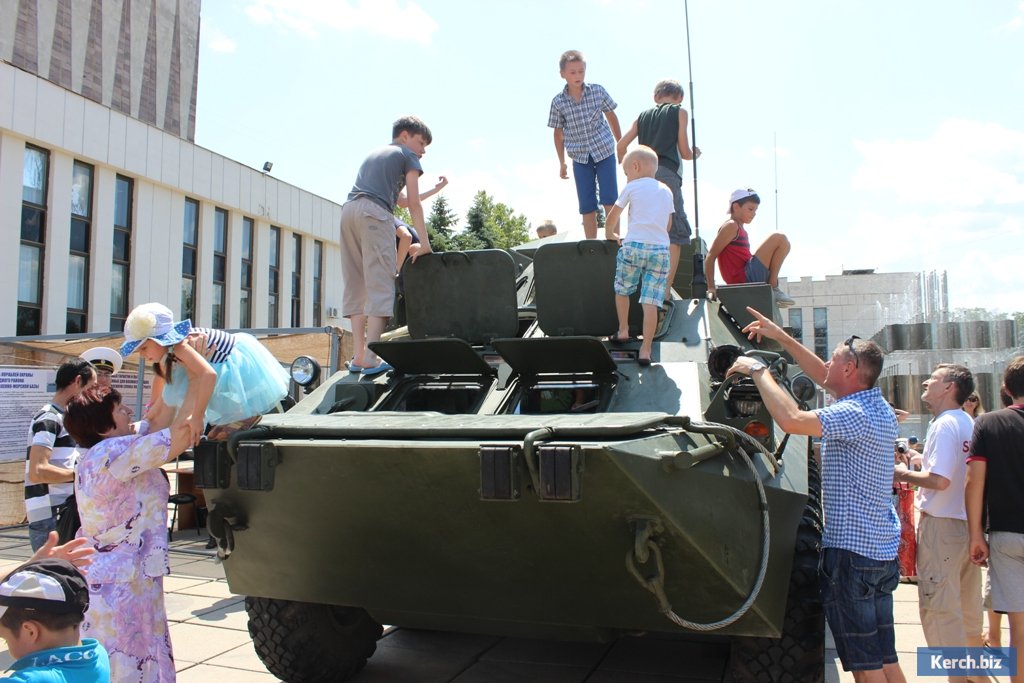 Not only military men and authorities deal with militarization of children’s conscience, state-financed institutions, non-governmental organizations and Orthodox priests of Moscow Patriarchate contribute, too.

For instance, in October 2016 schoolchildren of School No 37 of Simferopol City visited a military unit in the course of ‘Lesson of Courage and Patriotism: Life of Fedor Ushakov, Saint Warrior’, the human rights expert said. Crimean schoolchildren during the excursion to the military unit organized by Orthodox Church. Simferopol, 22 October 2016

‘Russia, violating the international humanitarian right, is constantly advertising the military service in its Armed Forces among the occupied territory people. Militarization of all spheres of Crimean social life results into substitution of concepts, misleading of facts, in addition to Russian army glorification. The most terrible is how Ukraine is presented to Crimean people in the light of this propaganda.

Backed with all these militarized events a cult of hatred to Ukraine and Ukrainians is being developed. A lot of resources are allocated to ‘wash the brain’ – children’s specifically. Child is a blank sheet and it is easier to shape his/her outlook than that of adults. With just five – seven years of such aggressive conscience militarization passed, the child would be sincerely sure that Ukraine is so horrible, that ‘junta’ does govern there, and would believe in all these ‘hair raising stories’ disseminated by the Russian propaganda. Another dangerous aspect of militarization is cult of violence produced in the way that children get the impression that there are forgiveable kinds of crime. That may be ignored. For instance, if a Ukrainian activist has been detained this is acceptable since he is a ‘junta’ supporter. The people start considering the violence to be a norm. And the selective use of violence to be a norm, too. It means that someone could be beaten up, detained, kidnapped with impunity.

An image of impunity and public love to various paramilitary detachments is created through various monuments, open lessons at schools. But what are these people in reality? In terms of criminal code, ‘Crimean self-defence’ and Crimean Cossacks may be attributed to ‘a criminal group’. These are people regularly committing crimes. They have their hierarchy closed to the military one. And ‘their hands are coated with blood’ –this is literally. Apart from the military men there were actual victims of Crimea occupation killed by Crimean paramilitary detachments. The first victim is Reshat Ametov. He was kidnapped by ‘Crimean self-defense’ representatives. Their names are known but so called ‘Crimean investigation’ declared them to be only witnesses. Nobody was punished for this crime. And the Crimean Human Rights Group has recorded minimum 9 similar cases. But perpetrators of such crimes are not considered killers and kidnappers in Crimea. The propaganda system in Crimea creates a completely different world view. People believe honestly that the Cossacks and militia men have liberated them from ‘Ukrainian fascists’. They are considered to be heroes. But what would happen in 5-7 years with the children subject to this propaganda today?

The concepts are being substituted in Crimea: war is a holiday and victory in the war is a prime value.

But war is death, destroyed families, sorrow and tears. What is going in the Donbas now is fully mispresented in Crimea. Numerous holidays dedicated to the war victory raise joyful emotions due to the military actions in the public conscience, particularly children’s one. And there is no difference whether this is a war in the Donbass, in Syria or somewhere else where the Kremlin needs it.

This kind of propaganda educates children to perceive the war as feast, the Victory over the enemy indicated by the Kremlin.

Till Russia has money it will invest it into the war and propaganda. The way to address the issue is to create the conditions when Russia has run out of funds. Therefore publication of review on Crimea militarization is one of the ways to make the Russian Federation liable, including the sanction tool, for its unlawful acts in Crimea.