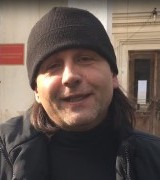 On 10 June, 2016 Bedritskiy M. A. the judge of Razdolnenskiy District Court in Crimea gave sentence to a citizen of Ukraine Vladimir Baluch.

The activist was found guilty of committing a crime under the Article 319 of the Criminal Code of the Russian Federation (Insulting a public official. Public insulting a government official during the performance of his duties or in connection with their perfomance) and was again sentenced to 320 hours of compulsory labour. This is stated in the copy of the court decisions that are available to the Crimean Human Rights Group.

Let’s recall that on 14 November, 2015 police officers with the support of the riot police unit came to the house where Vladimir Baluch lived to conduct a search on the decision of the judge of the Razdolnenskiy district court Abelyashev A.V. There were next police officers: Yaschenko, Kudrya, Fedotov, Dubrovchenko, Mitchenkov, Baranov.

The decision on the search was motivated by the abduction of “the car VAZ-2106 in blue colour” in Razdolnoe village on 10 October, 2015. The criminal case was opened regarding this incident and questioned witness said that Vladimir Baluch allegedly “keeps the stolen car at home, dismantles it and sells its parts”.

As a result of the search of the vehicle Vladimir Baluch is subjected to administrative detention for a period of 10 (ten) days according to the judge’s Abelyashev A.V. ruling. He was found guilty under the Part 1 Article 19.3 of Administrative Code of the Russian Federation – disobedience of a lawful order or requirement of a police officer.

According to Vladimir Baluch, the attention to him from the police is connected with his pro-Ukrainian position, which was expressed by him publicly – national flag of Ukraine was fluttering on the flagpole on the territory of his home. Vladimir also believes that he was taken into administrative detention in order so that he could not register the marks of beatings, which were caused to him by police officers during his arrest. During his detention, he repeatedly demanded the medical treatment was given to him and was refused.

Later on, this decision of the administrative court serves as an evidence of his guilt in both criminal convictions.

CHRG experts note that “Baluch case” shows the judges prejudice against the people with pro-Ukrainian position in Crimea. With respect to Vladimir Baluch the right to liberty and security of a person, the right to a fair trial, no punishment without law, right to respect of private and family life, freedom of expression and the right to an effective remedy have been violated.

Even attempts of some officials to comply the legitimacy of the Russian Federation laws did not make a difference. The prosecutor of Razdolnenskiy district Shmelev D.N. asked to cancel the verdict against Baluch and transfer it to a new trial and the judge of “the Supreme Court of the Republic of Crimea” Osochenko A.N. fully complied with his request. However, this did not affect the new trial because the verdict remained the same.