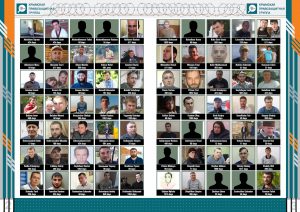 Right to liberty and personal security is one of fundamental human rights established by many international documents. The occupation of Crimea by Russia has resulted into curtailing rights and freedoms and launching political reasoned criminal persecution of Crimean residents. On the occasion of the International Human Rights Day the Crimean Human Rights Group (CHRG) has presented infographics on how many people were unlawfully deprived from liberty on politically reasoned criminal cases as well as how many days these people have spent already in custody. The infographics has been produced upon the outcomes of CHRG daily activities to document human rights violations including collection of information and evidence on the politically reasoned criminal persecutions.

Due to the Crimea occupation, at least 70 people have been deprived from liberty on the politically reasoned criminal cases since 2014.

The Crimean Human Rights Group experts developed a graph demonstrating how the number of people deprived from liberty due to the politically motivated criminal persecution on ‘Crimean cases’ has increased since April 2014. 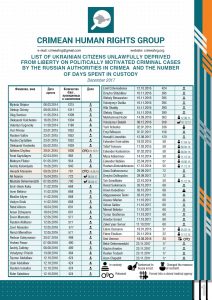 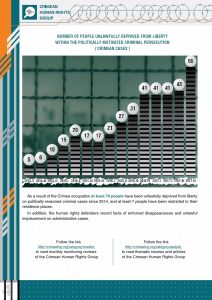 At the moment 52 people are still in prisons and detention facilities of Crimea or the RF, and three are placed under house arrest. The CHRG experts point out that this number is not final since there are also other criminal cases in Crimea that could demonstrate political reasons for persecution.

These people and their families need help and support of not only international community, but also of the Ukrainian state. Many families of Crimean political prisoners are multi-child, with 100 children in Crimea today left fatherless.

According to the view of Ms. Olha Skrypnyk, a CHRG expert, the government and parliament of Ukraine should do their best to adopt as quickly as possible a law on supporting political persecution victims and their families. The bill that may resolve some issues these people meet with has been drafted and registered. At this stage it is to be finalized by the Parliamentary Committee on Human Rights, National Minorities and Inter-Nation Relations. Then it is to be put on a vote and supported by a relevant number of MPs. And at the same time the Budget of Ukraine should allocate funds required for this law enforcement.

In addition, CMU Resolution No 651 of 11 July 2012 should be amended that would extend capacities of consuls of Ukraine to the RF in supporting Ukrainian prisoners in the Russian penal colonies.