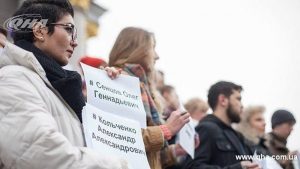 The number of Ukrainian political prisoners in the Crimea and Russia is constantly growing and as of March this year is at least 68 people, whereas in December last year there were 64 people. The corresponding information was provided by the head of the Crimean Human Rights Group, Olga Skrypnik, at the conference “Prospects for the Development of the State Policy Regarding the Occupied Territories of Ukraine,” QHA correspondent reports.

Thus, at least 58 political prisoners are in custody on criminal charges. Of these, 38 people are in the Crimea (almost all – in the prison of Simferopol) and 20 people are in Russia.

Olga Skrypnyk also spoke about new methods of pressure on political prisoners by the Russian occupation authorities. Russia introduced the practice when people, who are to be tried in courts of the Crimea, are taken to Rostov (RF) and a heating is held in a videoconference mode.

According to the human rights activist, this is done to increase psychological pressure on the detainee and complicate his defense, since lawyers are also mainly forced to work in a videoconference mode. Transportation to Rostov takes place, in particular, in order to break the possibility of communication and support from relatives and friends who in the occupied Crimea would have the opportunity to come to court and provide their moral support with their presence in the hall or pickets outside the courthouse.

In the Crimean detention center, the practice of deliberate refusal of medical care continues in order to receive “confession” from the victims. Such actions can be regarded as torture, the human rights activist stresses.

Olga Skrypnik reminded that Volodymyr Balukh has been on hunger strike for eight days, now he is out of contact, since after announcing the hunger strike he was taken to solitary confinement, where only lawyers have access, which is still limited.

At the same time, the human rights activist noted that now Ukrainian or foreign politicians could really help Ukrainian political prisoners. In particular, human rights activists are asking European politicians to write letters of request to the management of particular detention centers with a request to provide information on specific political prisoners. Such attention helps political prisoners to get at least some help. For example, the other day Andrii Kolomiyts received letters from Petro Poroshenko and Pavlo Klimkin, and after that he was first summoned to the management of the detention center and asked whether he had any problems or complaints.

Olga Skrypnik noted that at present the Ministry of Temporary Occupied Territories and the Government should approve the procedure for using almost 96 million hryvnias, which are for the first time envisaged in the budget to support the relatives of political prisoners, in particular, to provide legal assistance. According to her, these funds are needed daily for relatives of political prisoners, for their children, but due to the fact that the relevant order has not been approved yet, they cannot receive them.

Reportedly, on April 13 in the Hall of Columns of the Kyiv City State Administration a charitable action “Hand of Aid” will be held, aimed at supporting children of Crimean political prisoners. To date, in the occupied Crimea, more than 100 children have been left without parents who were arrested by the regime of Russian invaders for political reasons.