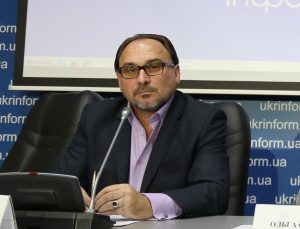 The expert of Crimean Human Rights Group (CHRG), PhD, associate professor, lawyer Yury Grishin analyzed the information from the public resources about the case of the Ukrainians, who are accused of sabotage in Crimea. According to him, in the actions of the occupation authorities of Crimea in this case there are series of serious violations of fundamental human rights and freedoms.

Violations of the presumption of innocence

From the position of the relevant decisions of the European Human Rights Court the following facts should be considered as a violation of the presumption of innocence. This right is stated in paragraph 2 of article 14 of the International Covenant on Civil and Political Rights and paragraph 2 of Article 6 of the European Convention on Human Rights. The essence of this rule is: “No one can be considered guilty until his guilt has been proved according to law.”

The presumption of innocence is guaranteed not only by the ICCPR and the ECHR; it is also supported by two rights, which state that everyone has the right not to be compelled to testify against themselves or to confess guilt. In this connection it is necessary to pay attention to the following.

The presumption of innocence remains in force throughout the criminal proceedings, regardless of the outcome of the prosecution. Therefore, as pointed out by the Court in matters of “Matiyashevich against Serbia” and “Garytski against Poland” cases, the fact that the applicant eventually found guilty, does not deprive him of the initial right to the presumption of innocence until the moment when his guilt is proved in accordance with the law.

European Court of Human Rights and the Human Rights Committee has clarified that the presumption of innocence applies not only to judges and the conduction of the proceedings in the court, but also requires that officials of other government agencies refrain from anticipating the results of the trial.

The Human Rights Committee without hesitation has found a violation of the presumption of innocence in the case of “Gridin against Russian Federation” in circumstances where high-ranking law enforcement bodies of Russia in their public statements, declared the applicant guilty.

Moreover, in “Marinich against Belarus” case Human Rights Committee found a violation of the presumption of innocence in circumstances where the applicant’s interrogation episodes were broadcasted on Belarusian state television and were accompanied by false and degrading comments about the applicant declaring him guilty.

Thus, it is already clear that the investigation regarding the so-called “Ukrainian saboteurs” case takes place in conditions of gross violations of their right to the presumption of innocence, which, incidentally, is enshrined in a fundamental beginning (principle) of criminal proceedings of the Russian Federation (Article 14 of the Code of Criminal Procedure). This is also indicated by other facts.

Violations during the interrogations of “saboteurs”

The analysis of the content of submitted videos suggests that they reflect the course and content of the interrogation of “Ukrainian saboteurs” fragmentally. However, we are not aware of the composition of the participants of interrogation (except of the investigator and “saboteur”), nor the status of Panov, Dmitry Shtyblikov and other persons being interrogated (the suspect or accused).

Taking into account the fragmented (selective) nature of videos it is impossible to assess the inspector action in terms of its compliance with all mandatory elements of procedural interrogation procedures. Although the violations of questioning start procedure, violations related to the identity of the person, explaining the rights and etc. (Part 5 art.164, art.189 Part 1 of the Criminal Procedure Code of the Russian Federation, and others.) are obvious.

However, attention is drawn to the fact during the interrogation, “saboteurs” were repeatedly set leading questions that already contain the answer, ascertaining their service in the Defence Intelligence of Ukraine, as well as the circumstances of its passage.

In this connection, the following should be noted.

Criminal procedure legislation of the Russian Federation does not clearly define what kind of leading questions are banned, recognizing invalid all leading questions addressed to the suspect or the accused (Article 77, part 1, part 2 art.189 Code of Criminal Procedure).

In the presence of such distinct procedural violations during the interrogation of Panov, Shtyblikov, Shabliy and Zahtey the evidence contained in his testimony, are not valid. They have no legal effect and cannot be the basis for the charges, as well as to be used to prove the circumstances relevant to the criminal case. This is clearly stated in paragraph 1 of Article 75 of the Code of Criminal Procedure.

These violations of the law, along with the position of the hands and facial expressions of “saboteurs”, fast rhythm, confidence, and the information richness of their responses, indirectly indicate the staged nature of the questioning.

It seems that during the interrogation of “saboteurs” there was no defender.

This is indicated, first of all, by the fact that the investigator blatantly violates the generally known method of recording the interrogation, which involves, in particular, video capture of all participants of investigatory actions as one of the prerequisites for high-quality video. Its goal is to capture objectively the fullest information about the procedure, content and examination results.

However, in the circumstances of the criminal case of “Ukrainian saboteurs” and the current legislation of the Russian Federation (Part 3 of Article 49 of the Code of Criminal Procedure) Shtyblikov and others had the right for a defence from the moment of actual detention as a suspect in the crime.

Moreover, in accordance with paragraph 5 of Part 1 of Article 51 of the Code of Criminal Procedure participation of defence counsel in criminal proceedings is necessary “if the person is charged with an offense for which you may be sentenced to imprisonment for a term exceeding fifteen years, life imprisonment or the death penalty “.

Thus, in view of the sanctions of part 2 of article 281 of the Criminal Code “Sabotage” (imprisonment from 12 to 20 years), which is charged in connection to “saboteurs” in the course of their interrogation the presence of  the defence lawyer is compulsory.

In the presence of such violation of the law, evidences obtained from “saboteurs” in the course of their interrogation are inadmissible.

Inadmissible evidence are the testimony of the suspect that were given during the pre-trial proceedings in a criminal case in the absence of the defence, including the cases of refusal from the defence, and not confirmed by the suspect, accused in court (paragraph 1 Part 1 Article 75 of the Code of Criminal Procedure).

The foregoing circumstances, with a high degree of probability suggest that the “Ukrainian saboteurs” gave false testimony, slander themselves for reasons of applying of the illegal methods of conducting preliminary investigation to them.

Violations during the interrogation of a witness

This fragment of the video clearly shows a violation of the witness interrogation procedure (identification, clarification of the rights (including the right to testify in native language).

For perjury or refusal to testify witness is liable under Articles 307 and 308 of the Criminal Code of the Russian Federation.

The clearest example of how the evidential base illegally formed – witness is demonstrated the photos of unknown persons, where he learns the face similar to the one about which he testified.

However, the procedure of the identification by photo is provided by Part 5 of Article 193 of Code of Criminal Procedure. According to this rule of law if it is impossible to present the person the identification can be carried out by the photograph that is presented together with photographs of others, outwardly similar to an identifiable person. There should be at least three photos.

From the point of the provisions of Article 75 of the Code of Criminal Procedure the information that had been obtained as a result of this simplified recognition cannot be recognized as valid, as such that were obtained in compliance with the requirements of the law